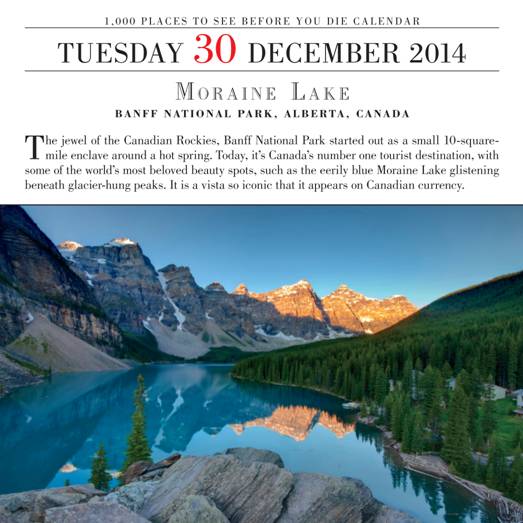 Today’s Travel Tuesday destination is Alberta, Canada courtesy of the 1,000 Places to See Before You Die Page-A-Day Calendar.

1. Calgary Stampede: Calgary goes Western during its world-famous stampede, kicking up its (boot) heels for ten rodeo-filled days in July. Rodeos have been a part of Calgary summers since 1886, soon after the city was founded as an outpost for the Royal Canadian Mounted Police.

2. Banff, Jasper, and Yoho National Parks (pictured above): Spanning the crown of the majestic Canadian Rockies are Banff, Jasper, and Yoho National Parks, collectively known as the Rocky Mountain Parks. Banff was Canada’s very first national park and is now a 2,656-square-mile giant and Canada’s No. 1 tourist destination. The park’s pride is a pair of shimmering jade green lakes: the stunning Moraine Lake, nestled beneath soaring 10,000-foot peaks, and Lake Louise, known for its dramatic setting at the base of Victoria Glacier.

3. The Canadian Rockies by Train: When railroads first crossed Canada in 1885 (“an act of insane recklessness,” read the headlines), they did not more than bring settles: They opened up western Canada to tourism.” Traveling by train through the Rockies is still one of the best—and most relaxing—ways to explore this massive and inspiring country. VIA Rail Canada, Canada’s national passenger rail network, offers a year-round 4-night, 2,775-mile trip between Toronto and Vancouver. It passes through Jasper National Park, over the Continental Divide, and past the Canadian Rockies’ highest peak, 12,972-foot Mount Robson.

Read more on 1,000 Places to See Before You Die and the calendar line here. 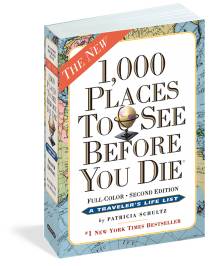