Welcome to our #FridayReads feature on the blog, where we’ll be excerpting a chapter of one of our favorite books to start your weekend. This week, it’s The Last Days of Cafe Leila, Donia Bijan’s exquisite debut novel about food, family, and a bittersweet homecoming, set against the backdrop of Iran’s rich, turbulent history. 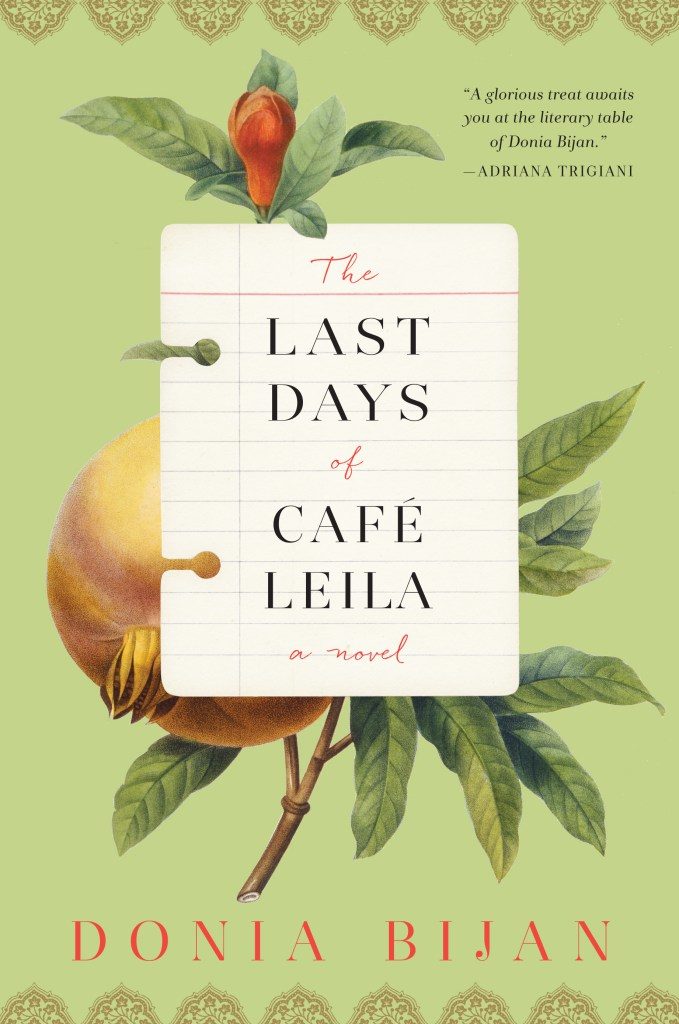 The Last Days of Cafe Leila

Noor stood at the sink with her sleeves rolled up peeling yellow potatoes and dropping them into a water bath. The long blade of her knife, sharpened without a scratch, gleamed on the chopping board. Her father believed that anything cut with a knife is tastier than mauling it in a food processor, so even in her modern San Francisco kitchen, she didn’t own one and took special care of her knives. She liked to use her black cast-iron skillet to cook the onions with crumbled sage from the dried bouquets above her stove, cooking them in oil until they were quite tender before adding the sliced potatoes. Already the onions’ sweetness wafted through the house, settling into the linens. She knew that her daughter would not like the pungent smell, so she closed her bedroom door and opened the tall windows to the cool morning air and the sound of a faraway lawnmower.

Most of her recipes came from her father, but Noor learned how to make the luscious potato cake from Nelson’s mother. The recipe her mother-in-law had whispered into Noor’s ear was the authentic one used by Nelson’s great-grandmother. In its own unpresumptuous way, the Spanish Tortilla is an honest love omelet, and every bite must be suffused with fragrant olive oil—in this case, too much of a good thing is not a sin. Even when Noor was an amateur and the potatoes were sometimes raw, Nelson would say, “Oh my God! That was the best tortilla of my whole life!” Which of course wasn’t true, but he was acknowledging the effort of peeling and slicing immense quantities of potatoes.

What she loved most about Spanish food was its lusty simplicity, so unlike the gastronomical somersaults of French cuisine or the complexity of the Persian food she grew up with. When she was little she could eat pyramids of saffron rice and rich meat stews, but she now associated the colors and perfumes of her husband’s native cuisine with their courtship, with paddleboats and honeymoons and champagne in silver buckets, with flamenco and candlelight and little fried sardines with sea salt by the water. Her postcards were menus, smudged and wine-stained, saved from their meals, addressed to herself and read carefully like romance manuals.

With just two hours to prepare a picnic, there would be no time to get her nails done before going to work. It seemed a waste of time when she could better spend that hour layering rows of cured black olives with roasted red peppers. There were still cucumbers and radishes to slice, strawberries to wash. She thought about how Nelson would point at each bowl like a giddy child and speculate with excitement on what the food would taste like and then enjoy it all a hundred times more than painted fingernails. And when would they ever be as eager to celebrate as now, as today, their sixteenth anniversary, on a ferry over to Angel Island at dusk? They saw so little of each other lately that her heart was set on this annual tradition, which coincided with the first days of spring, when they would break away from work to escape to the harbor, leaving their patients in the care of their colleagues.

“There we are,” she said to herself. “I just have the lemon left.” She cut a lemon into eighths and placed it with sprigs of cilantro on a blue butter dish from a set they were given as a wedding present, then rinsed the knife under hot water, drying it with a dish towel before placing it in the drawer. From the cupboard she took a wicker picnic basket and put it on the kitchen island to begin the careful assembly of silver, two china plates and crystal flutes, each item nestled between linen-covered tiers. No matter how hungry they were, there was a certain slowness to unpacking the basket, to unfurling their napkins and popping the champagne, that made the afternoon last longer, allowing them more time to tell each other stories they had kept to themselves until now. It was as if before Nelson she had eaten in the dark, and when he came into her life their meals became as companionable and good as grilling sausages and peppers over an open fire under the stars.

On the counter lay a note for her daughter that she would be home late, with instructions on how to heat the veggie lasagna when she returned from volleyball practice. Lily had only recently become a finicky eater, vowing not to swallow anything that could walk, fly, or swim, but Noor felt safe with pasta. All that was left was to brew a thermos of black coffee and remove the tortilla from the mold before leaving for the hospital. She hummed and flitted about the kitchen like a moth in a kind of ecstasy, catching a glimpse of her flushed face in the glass oven door, her cheeks ablaze.

The hospital break room was small and sparsely furnished with a watercolor painting and not much more than the necessities of a microwave and a refrigerator. Here the staff relished any indulgence, from party napkins and frosted cakes to the contents of their lunch boxes, which could be anything from barbecued chicken to carrot raisin salad—whatever added cheer to the drab decor and their long shifts. Thus they broke into a wild cheer with the appearance of flowers, especially from boyfriends and husbands.

The anniversary bouquet for Noor arrived just as she started her shift and the nurses paused their lunchtime banter to tease her good-naturedly when she brought them into the break room. Noor took her flowers to the sink to clip their stems. She rinsed a vase and filled it with cool water, then carefully cut the thick ends of two dozen red roses with surgical scissors before placing them in the vase on the nurses’ table.

There was an outburst of sympathy when Noor read Nelson’s note out loud: “Mi vida, can we postpone our picnic? I’m so sorry, I have a surgery this afternoon.” This had never happened before. She said nothing and sat down with her arms wrapped around herself. It was good how disappointment slowed things down so she could ease back into the chair with her coffee and look out on the spray of roses, letting the chatter continue without her. Amy took her hand and squeezed it as if they were thinking the same thing, but Noor was thinking about the basket in the trunk of her car beneath a blue-and-white checked tablecloth. What about all that food? she thought. There’s no sense in wasting the tortilla; he has to eat after all. She would drop it off for him after work. With that, she went to check on her patients, who looked at her kindly and with renewed relief as if she had been gone for weeks.

Nelson was an in demand heart surgeon, though he rarely missed family occasions and even managed to coach Lily’s soccer team. Noor would have walked to cardiology when her shift ended, but being on the other end of the compound, it was easier to drive rather than carry the food over. Her eyes were focused on finding a parking space until they were drawn to a familiar shape near an unfamiliar car. Nelson, in pale blue scrubs, stood in the parking lot at arm’s length of a nurse Noor met once at a staff Christmas party. He leaned forward to tuck a strand of hair behind her ear and she smiled up at him. Noor had just pulled in, and without needing to see or hear more she knew the affection in this small gesture revealed everything between them. One glance told her what was lost and could not be mended. A little gasp of surprise escaped her lips.

Without thinking, she drove straight home and unpacked the picnic as if it had simply rained and there was a change of plans. She threw away the olives and the peppers, dumped the tortilla in the garbage, and poured the champagne down the drain. As she washed the Tupperware, she slipped her wedding ring off her soap-slippery finger and left it by the kitchen sink. Then, seeing the school bus across the street, she ran outside and startled Lily wi