The 42-inch-high boards surrounding an ice rink are key to the exhilaratingly fast pace of a hockey game. Unlike other sports, such as football, soccer, or basketball, where play often stops when the ball goes out of bounds, the boards keep the puck in play and the action going. Those boards often shudder as players check one another and collide into them, and they’re usually marked with dozens of black smudges where pucks have hit at high speed. Sometimes the boards are even called a “sixth teammate,” because players learn to ricochet the puck off them, either to clear the puck in dangerous situations or to pass to a teammate when opponents are closing in. 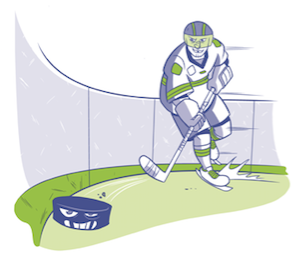 Don’t worry, you don’t need to go down to the skating rink and “suit up” with all that bulky (and probably very stinky) equipment to understand how hockey players can “play the boards.” It’s easy to do in a darkened room, with two friends and a flashlight. One of your friends will be your “teammate” on a power play in the dying seconds of the game when you desperately need the tying goal. You’ve got to pass the puck to her (or in this case, tag her with your flashlight beam) while your other friend is defending. He’s doing his best to block that beam of light heading to your teammate. He’s crowding you out big-time, and the precious seconds are counting down. If only you had someone else to pass to . . . or maybe something. It’s worth a try! 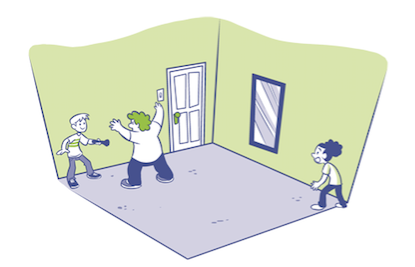 You’ve just used some very nifty geometry to get past the opponent. The light reflects off the mirror in the same way that a puck bounces off the boards in a hockey rink. The angle that formed when the beam hit the mirror (or when a puck hits the boards) is called the angle of incidence. Math theory—and basic instinct—tells us that the angle of incidence is identical to the angle of reflection (where the light leaves the mirror or the puck bounces off the boards). People playing pool or billiards use the very same technique when they “play the cushions,” trying to avoid one or more balls by bouncing the cue ball off the sidewalls of the table. 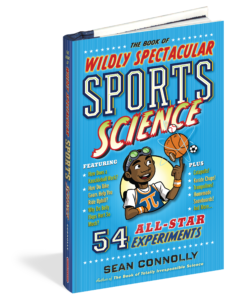 Why does a knuckleball flutter? Why do belly flops hurt so much? Why would a quarterback prefer a deflated football?

Here are 54 all-star experiments that demonstrate the scientific principles powering a wide variety of sports and activities—and offer insights that can help you improve your own athletic skills. How does a black belt karate chop her way through a stack of bricks? Use Popsicle sticks to understand why it’s possible and learn the role played by Newton’s second law of motion. Does LeBron James really float through the air on the way to a dunk? Use a tennis ball, a paperback book, and the help of a friend to understand the science of momentum and the real meaning of hang time. Using common household objects, each project includes step-by-step instructions, tips, and a detailed explanation of how and why the experiment worked. It’s a win-win.

The thrill of victory, the agony of defeat—it’s all in the science.