#30DaysofGiving: A FIERCE AND SUBTLE POISON

Welcome to Workman’s #30DaysofGiving! This holiday season, we will be excerpting from some of our favorite books of the year and giving readers the chance to win a copy. Follow along by visiting our master digital advent calendar, and use the hashtag #30DaysofGiving on social media for daily updates. 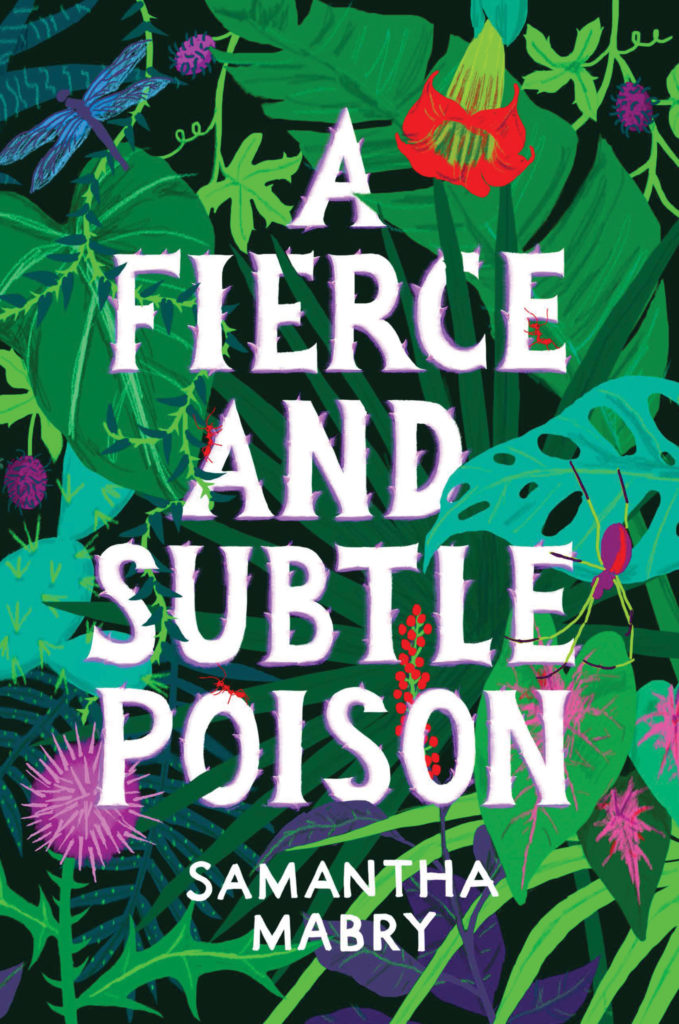 A FIERCE AND SUBTLE POISON by Samantha Mabry (Day 2)

What follows is an excerpt from the book.

GREEN SKIN AND GRASS FOR HAIR

The house at the end of the street is full of bad air.

That’s what the señoras always told us. They stuck their fingers in our faces and warned us not to get too close. They said it wasn’t right that the shutters on the windows remained closed, even after rainstorms when the air was so thick it would rest on your skin and stick in the back of your throat. They said that the house had been cursed by the woman who once lived there. She hadn’t always been bad, the señoras said, but her husband’s constant neglect had left her hollow and wicked.

According to the old ladies, no one had ever trusted that man: he was white and a scientist. He was never in church. He walked the streets in the rain. He’d leave Old San Juan for weeks at a time and go out to the forests around Rincón, where he’d tear the legs off frogs, dissect live snakes to see their hearts beat out, or do whatever else it was that scientists did.

While he was gone, his wife was confined to the house. She spent her days behind the three foot-thick plaster walls tending to the plants in the courtyard and caring for the scientist’s prized macaw. Everyone in town hated that bird. It never shut up. Each morning, it would jump onto one particular limb of a banyan tree and let out its ungodly screeches while its green and red feathers flickered like a pinwheel in the sun. Whenever someone walked by, the bird would slowly cock its head to an absurd angle, stare silently for a second or two, and then begin clucking blasphemous phrases, reciting lines from Borges stories, and singing songs nobody had ever heard of.

When I asked the señoras which lines from which Borges stories the gringo scientist taught his bird, they said they didn’t know. It wasn’t important. They curled their lips and asked why I would care about such a thing.

What was important, the señoras stressed with wags of their wrinkled fingers, was that the scientist was a very, very bad man. Somehow, somewhere, he’d lost all the beauty in his life, and that – that loss – was what caused him to rob his wife of all the beauty in hers. Everyone knew a Puerto Rican woman needed sun and wind and ocean water. But the scientist didn’t care. He treated his wife like a creature under glass. He treated her like…the señoras always paused here for a moment…un especimén.

That’s how life was for the woman who lived in the house at the end of Calle Sol until one summer, during which five hurricanes ravaged the island, battering the coastlines and tossing around telephone poles, a summer during which the scientist had again disappeared to the forests near Rincón to do whatever it was a scientist did. That was the summer things began to break apart.

The cracks in the exterior plaster walls came first, thick and meandering like the veins in an old woman’s legs. Then the concrete of the sidewalk in front of the courtyard split, causing a mighty fissure a foot and a half wide. Aphids took over the garden. The macaw, perched up on its banyan tree, would spend hours plucking out his red and green feathers, letting them fall into the street one by one.

The woman’s spirit was crumbling. And, as if out of sympathy, the house and the garden and the bird began to crumble along with her.

Around this same time, the people of Old San Juan all started having the same nightmare about a green-skinned little girl who would stand in front of them and throw stones at their faces. After waking from fitful sleeps, they suffered further by having to listen to that tonto bird curse and croak out songs all day long. For months, they never had any peace. Then, one night in early December, the little green-skinned girl stopped haunting everyone’s dreams. The following morning the scientist came home from Rincón to find his wife and his bird gone. The woman had taken nothing and left a curse. The bird’s green and red feathers were scattered across the house. Only the plants in the courtyard remained.

That was the day the man closed all the shutters and never opened them again, and that was the day all the birds in Old San Juan stopped flying over the house. They knew better than to get their wings tangled up in curses.

Over the years, my friends and I came up with our own stories about the house at the end of Calle Sol. Rico said the scientist’s wife died after giving birth. She’d been in labor for five days, and after her husband held her green-skinned baby girl up to her face, she mumbled some prayers up to the saints. Then she kicked the bucket.

Ruben had a better version. He claimed the woman had been so upset by the fact that her husband was never around that she’d thrown herself off the highest of the stone walls of the massive old fort known as El Morro. It happened in the middle of the day, as dozens of people were out steering their kites through the wide blue sky. The last thing anyone saw was the woman’s crazy long black hair and the thin, white fabric of her dress fluttering in the sun as she took a running leap. When the kite-flyers rushed over, expecting to see her broken body on the ledge many feet below, all they saw was a hibiscus bush with a single flower the color of fruit punch.

Carlos said he didn’t know what happened to that pinche woman. All he knew was that every single one of the street cats knew better than to walk in front of that pinche house. Once, however, a tiny kitten, its eyes barely open, got separated from its mother and found itself alone on the sidewalk in front of the courtyard. The kitten mewed and mewed all night. The next morning someone found it curled up into a ball, dead from chewing on a leaf that had fallen from the one of the tall bushes.

“Everybody knows,” Carlos claimed, “that the plants in that courtyard are full of poison. If you touch them, they will make your nightmares come true. Then you will burn with fever. Then you will die.”

I thought the kitten story was bullshit. There are thousands of cats prowling around Old San Juan, and they’re likely to die for any number of reasons. The kitten could’ve been born sick and cast away by its mother. It could’ve had rabies. It could’ve eaten some of the chicken scraps Sr. Guzmán mixes with glass and leaves out on the street in small piles to try to kill the ferals.

The summer I turned eleven, while we were sitting on a pier watching the cruise ships go by in the twilight, was when Rico claimed the scientist who’d lived in the house at the end of the street had a daughter and that she still lived there. He’d seen her. She was a little girl with green skin and grass for hair. He said he’d even talked to her. She’d told him she was a witch who could grant wishes.

We ran from the pier to my room at the hotel as fast as we could to scribble our wishes on the stationery the housekeepers kept stocked on my nightstand. It took Ruben the longest to figure out what his wish would be, but I knew mine right away. I wanted to lift the curse from the house, so that birds would fly over it again and the woman with the long dark hair would come home and throw open the shutters.

Once Ruben finally decided that his wish would be for his dead dog Pepé to come back to life, we folded our wishes in half, sprinted down to the end of Calle Sol, and tossed those wishes over the courtyard wall. The paper fluttered into the bad air and disappeared.

While my friends raced each other back to the pier, I stayed. I waited in front of the house to see if a bird would fly over and to listen to the sound of a woman crying. Nothing happened. And, as far as I know, none of our wishes ever came true.

One summer soon after, the stories stopped. Of course, the house at the end of Calle Sol was still there, still crumbling. The broken sidewalk had never been fixed. The blue paint was still chipped and faded, and the tops of plants still waved over the courtyard walls, trying to tempt me, but my friends and I had gotten too old to care about wishes, curses, and green-skinned little girls.

That’s because there were other girls—real girls—whose bodies we could press against the walls of buildings in alleyways late at night. Up close, their skin smelled like warm, wet sand, and their mouths tasted like coconut water. They wore the thinnest cotton dresses with the tiniest straps we could slip off their shoulders, and their long, dark hair was always curled from all the moisture in the air.

I was kissing one of those girls when the witch who grants wishes first threw stones at my face. 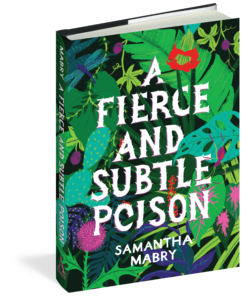 In this stunning debut, legends collide with reality when a boy is swept into the magical, dangerous world of a girl filled with poison.

Everyone knows the legends about the cursed girl—Isabel, the one the senoras whisper about. They say she has green skin and grass for hair, and she feeds on the poisonous plants that fill her family’s Caribbean island garden. Some say she can grant wishes; some say her touch can kill.

Seventeen-year-old Lucas lives on the mainland most of the year but spends summers with his hotel-developer father in Puerto Rico. He’s grown up hearing stories about the cursed girl, and he wants to believe in Isabel and her magic. When letters from Isabel begin mysteriously appearing in his room the same day his new girlfriend disappears, Lucas turns to Isabel for answers–and finds himself lured into her strange and enchanted world. But time is running out for the girl filled with poison, and the more entangled Lucas becomes with Isabel, the less certain he is of escaping with his own life.

A Fierce and Subtle Poison beautifully blends magical realism with a page-turning mystery and a dark,  starcrossed romance—all delivered in lush, urgent prose.