#FridayReads: THE GIRL OF THE LAKE

Welcome to our #FridayReads feature on the blog, where we’ll be excerpting a chapter of one of our favorite books to start your weekend. This week, it’s O. Henry Prize winner Bill Roorbach’s collection of richly varied, moving stories, The Girl of the Lake. 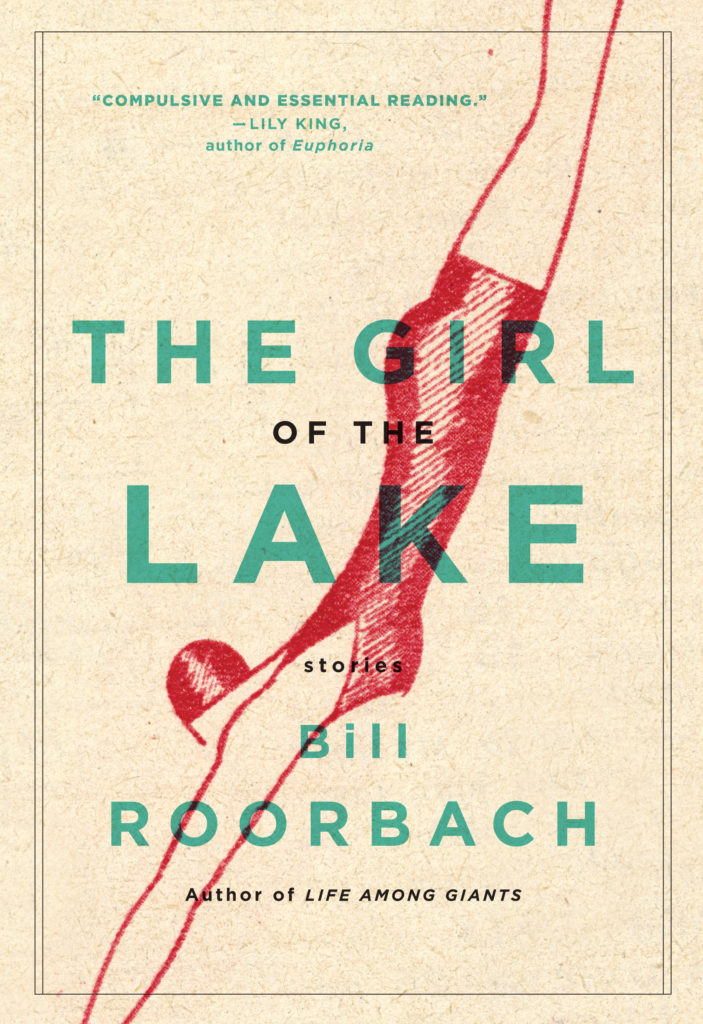 An Excerpt from “The Fall”

“Heavy,” Timothy said. He could say just the one word heavy in such an ironic way that it meant everything about the little argument they’d had last night and the bigger one this morning, and about all her complaining, and yet how good she suddenly felt, even climbing up the big rocks here. Looming in the woods above them was a gargantuan boulder, yellow where all the rock around them was gray, a glacial erratic, Jean knew from a half-forgotten geology class, a mammoth presence, dragged by the ancient glacier all the way from Vermont, likely, cracked magnificently along the way, fallen into two pieces you wanted to push back together. “That is a glacial erratic,” Jean called forward. Timothy said nothing, hiked on, though she knew he had heard her by the brief and infinitesimal tightening of his neck.

Well, altogether she had preferred art history in any case: Bonnard, Kandinsky, Cézanne, Max Planck, Otto someone, Courbet, Delacroix, Manet: why were they all men? Someone had complained and Professor Della Sesso had agreed, stopped his own class, rewritten his own syllabus in front of them, come back the next week with slides from Käthe Kolwitz, Vanessa Bell, Suzanne Valadon, Mary Cassatt, Romaine Brooks, Natalia Goncharova. He’d stopped the class! Of course it was all planned, to make his point, a great point about the place of women not so much in art but in art history. He was a beautiful man. Jean missed her college days. Her publishing job was basically secretarial, second assistant to the curator of the image bank at Time Warner. At least it was about art.

They stopped a little higher, sat on a kind of wide shelf of cool, dry granite, pulled the top layer out of Jean’s pack, ate a lunch of chicken roll-ups she’d made this morning, two carrots each (Timothy had peeled them unnecessarily, making fun of Uncle Bud’s garden—its very existence when there were grocery stores), and then two big pieces of the carrot cake she’d made for Uncle Bud—carrots were the theme—a quart of water between them (which would be altogether nearly three pounds less for her to carry).

Then he was silent, merely ate. He was often silent. He was twenty-five, too. Jean knew he was thinking and not to interrupt. He’d listen if she said something—but if she did talk, then he wouldn’t say whatever was coming, whatever bit of conversation he was brewing up—this was the silence before the talk, and she loved to hear him talk, loved him, in fact, from the bottom of her shoes, despite what Uncle Bud had said, late (Timothy already reading in bed), poor, unshaven Uncle Bud slurring his whispered words, eyes liquid, but so full of warmest caring and gentle humor: “You’ll marry him and stay with him like your mother stays with your fucked-up father, even not loving him, thirty years to realize it’s so, yes, Jean-Jean, it’s so for her as for you, and she still can’t shake him, just lies down for him, bed of nails. Nothing can stop you, I know. No, no, I know it’s true, Jean-Jean. No, no, I’m right, no use to argue: it’s misery you’re courting, since that’s all you’ve known.”

There in the forest, waiting for Timothy to speak, Jean finished her sandwich and repeated to herself what she had whispered back to Uncle Bud (who had finally let her talk, listened unbelieving): she loved Timothy and felt just wonderful about him. And it was true—she could hardly remember what they’d argued about last night when she’d come to bed, what they’d argued about this morning (or ever, for that matter), and wanted to be his wife.

Suddenly Timothy spoke: “It’s hard to imagine,” he said. “Hard to think of ourselves like, fifty years old, like Uncle Bud, huh, isn’t it? That such a thing could happen? I mean, what if it’s just a kind of joke they play on younger people, just to make ’em feel bad—right?—like, they know goddamn well that we’re going to be always just like this, more or less like this—I mean, there are young people, which is one unchanging species, and then there are old people, which is another—and the old-people species have as a kind of group joke that they pretend it’s all one-in-the-same species—that we young ones are on a long trip that leads to their sorry-ass state.”

Jean laughed for him and he smiled and that melted Jean, that very handsome smile. She looked in his eyes and said, “But, Herr Doktor, I distinctly remember being younger. I’m not sure you’ve included all the evidence here.” Two years and they had this whole kind of private vaudeville act together, where she played graduate student and he played crazy brilliant professor. She really, really wanted to go to grad school, art history, to follow her favorite prof to his new position in Paris—he’d emailed her twice inviting her to apply—but that would have to wait.

“Well, right—but we’re the kind that go from zero to about twenty-six and just hover there, always almost twenty-six, like someone in a book—always the same age every time you read it. We’re the somewhere-under-twenty-six-always species.”

“What about a book where the characters grow old and die? I can name a few.

“Written by the Olds! Self-serving tripe! What on earth garbage have you been reading?” Even being funny he sounded harsh, like the joke was on her.

“I don’t read trash,” she said, trying to keep the tone of high comedy, failing.

He wasn’t listening anyway, just shuffled through the side pocket of his pack, eventually tugged out his tiny jar of insane pot. Methodically he rolled a parsimonious and perfectly cylindrical joint, then lit it, one of their twelve waterproof matches, and they had two tiny hard-sucked puffs each.

Coughing a little, trying to suppress it, trying to rescue the moment, Jean said, “So we’re the species that gets only so old. So I’ll get to catch up to you, yes?” She was three months younger than Timothy.

The feeling of the pot overtook her immediately. She knew he’d have little more to say for a while. No one was around them in the woods, so Jean (in love) put her ear on Timothy’s chest to listen to his heart, and he leaned back against the rock and mulled his important thoughts while she undid his blue jeans just partly, just enough to get her hand in and hold his dumb, dependable willy, which rose tenderly to greet her grip. This, she liked. And he liked it, too, and tucked a hand back of her blue jeans and kind of hefted her on top of him for a long kiss, and on the moss there on the side of the faint trail they gradually got their pants down and wriggled to get his jacket on the rock beneath them without taking their hiking boots off, even, and had a very brief grind ’em (as he liked to call it—she didn’t mind so much anymore) and then some kissing, which showed that he was in a good mood, too, a very lot of kissing, as when they first met and would make love for hours in her old sublet, a great apartment in the Village now long gone, pretty white walls with art, and she couldn’t orgasm at all, he made her so nervous, and if she brought it up (she believed in communication) he just said that orgasm was not a verb. Here in the woods and more firmly in herself she surprised herself coming quickly, if not too hard (coming was his word), orgasming to his overeager fingers while they kissed. Something about the forest made it easy and different, also that he bothered.

“You are a glacial erratic,” he said.

“That is an insult, Doktor,” she said, quite pleased that he’d been listening earlier, just saving it up. He’d know what a glacial erratic was, knew a lot about the world and the woods. They cleaned themselves up some with a paper towel that she dutifully stored in a baggie and pulled their pants up and hefted their packs. She could feel that hers was lighter.