Excerpted from Daniel Shumski’s bestselling Will it Waffle?

Whether from scratch or from a box, all roads lead to stuffles.

Perhaps this isn’t really stuffing, because it’s not cooked inside the bird. Dressing, maybe? Either way, cooking the stuffing inside the bird has fallen out of favor because of food safety concerns. By the same token, I do not recommend putting a waffle iron inside your turkey.

Lisa Futterman gets credit for this idea. We met early on in my waffling experiments, and she became a waffle iron devotee. (Next to my mother, she might be the person most excited about this cookbook.) Her version used a bit of waffle batter as a binder for the stuffing ingredients. But I am nothing if not a purist. Okay. That’s not true. I am a lot of things, if not a purist. But I am also a purist. And so I was determined to find a way to make it work with just the stuffing ingredients.

You do have to make peace with the idea that the stuffles may not come out completely intact. Some will. Many, even! But if you go into it with the idea that they will all emerge camera-ready, you will come out of it with tears (and perfectly good although perhaps cosmetically imperfect stuffles). They will still be perfectly good—and can be deliciously disguised with a topping of turkey, gravy, and cranberry sauce.

If you don’t have poultry seasoning on hand, substitute equal parts of dried marjoram, thyme, and savory. And if you’d rather go the instant stuffle route, mix 3 cups stuffing mix (from a 1 ounce package) with 1½ cups water and 3 tablespoons melted butter, stir, and let hydrate for ten minutes. For this method, start the recipe in Step 6. Instant stuffles will cook more quickly than the scratch variety, so check them after 3 minutes. If you’re making them from scratch, the size of the bread cubes is a rough guide. Don’t spend too much time with a ruler on the bread cubes. That’s time you could spend waffling. 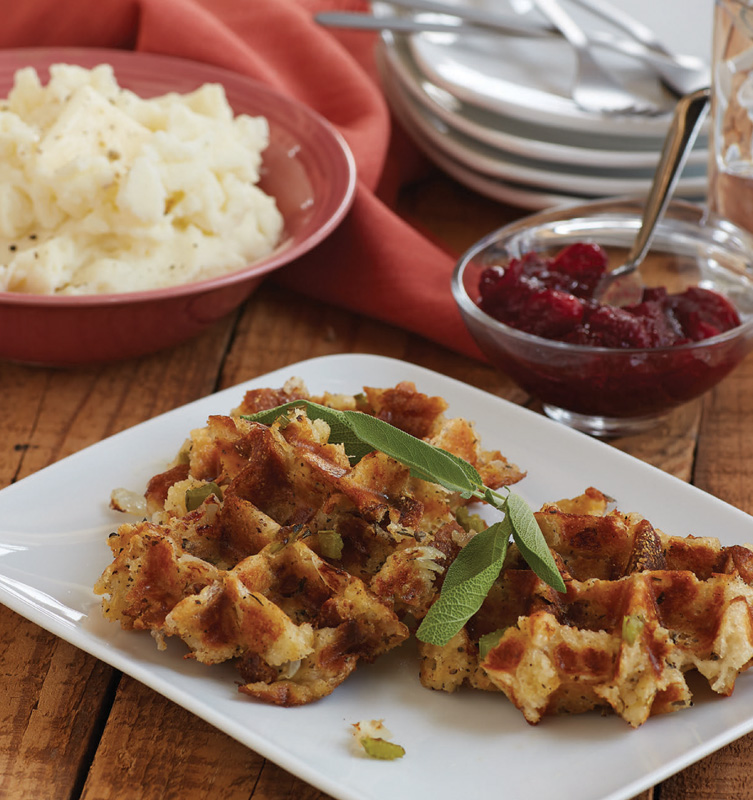 Place the olive oil in a large skillet over medium heat. Add the onion and celery and sauté until the onion is soft and the celery is beginning to soften, about 5 minutes. Add the salt, pepper, poultry seasoning, and dried sage and cook for 1 minute more to heat through. Remove the pan from the heat.

Place the bread cubes in a large bowl. In a small bowl, whisk together the butter and chicken broth, then pour that mixture over the bread. Add the vegetable mixture and stir.

Preheat the waffle iron on medium. Preheat the oven on its lowest setting.

Allow the stuffing mixture to sit for 5 minutes to absorb the liquid completely, stirring it once or twice.

Close the lid and press down to compress the stuffing.

After 4 minutes, open the lid to check on the stuffle. It should be golden brown and cohesive. Use a silicone spatula to loosen the edges before sliding the spatula underneath the stuffle and lifting it out. (If you’re worried about the stuffle holding together, it may be easier to use two spatulas — one for the top and one for the bottom.)

Repeat Steps 6 through 8 for the remaining stuffing mixture. Keep completed stuffles warm in the oven.

holidaysThanksgiving
November 24, 2016 By Daniel Shumski
How to Carve a Turkey (& Other Last Minute Solutions) #30DaysofGiving: BUT MY FAMILY WOULD NEVER EAT VEGAN!

Daniel Shumski is a writer and editor who has hunted ramen in Tokyo for the Washington Post and tracked down ice cream in Buenos Aires for the Los Angeles Times. Between stints at the Chicago Sun-Times and the Chicago Tribune, he worked for a Midwestern heirloom apple orchard. His first book, Will It Waffle?: 53 Irresistible and Unexpected Recipes to Make in a Waffle Iron, won praise from the New York Times, People magazine, and Food52. He lives in Montreal, where his French is still a work in progress.