THE SPECTRUM OF HOPE: A New Perspective on Alzheimer’s Disease

Read about Dr. Gayatri Devi’s optimistic approach to Alzheimer’s and other dementias in the introduction to her incredible new book, The Spectrum of Hope.
Buy the Book
Amazon | B&N | Indiebound | Workman 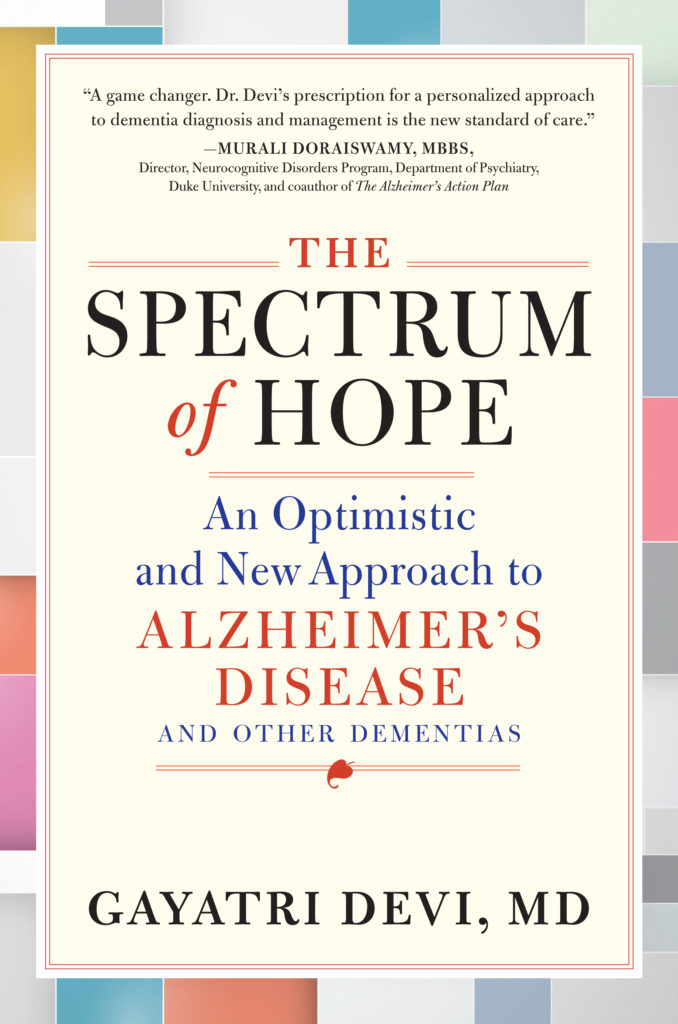 “I feel like I am being completely controlled,” said my 78-year-old patient Mary, a retired college professor with a brunette bob that neatly framed her dark eyes. She looked sadly at me, adding, “What I say makes no difference. Every aspect of my life is being managed. What is the point of living if things are going to go on like this?”

Her mood that day was very different from when I’d last seen her. What had happened in the interim? I soon found out. Her ophthalmologist, at the behest of Mary’s daughters, had told her to stop driving.

“Her vision isn’t good anymore,” said one of Mary’s daughters, who had accompanied her mother to my office. “And Dr. Smith felt that Mom wasn’t safe behind the wheel.”

“But my eyesight hasn’t changed in ten years,” Mary shot back. “I’ve had the same prescription since before your father died!”

Her daughter gave me that look that I have come to know so well, the It’s the dementia speaking; ignore what’s being said look. It’s a look that I see daily on the faces of caregivers when patients assert that they are still working at the job they retired from years ago, when they insist they haven’t had breakfast that morning, when they say that their children have stopped calling.

It’s easy for me to recognize the look, and patients themselves quickly become aware of it as well. Not surprisingly, they are angry when their views, regardless of how erroneous they may be, are dismissed.

“Don’t you give her that look!” Mary said, catching her daughter in the act. “You girls are treating me like I am a child. I am not a child, and I refuse to be treated like one!”

Mary turned back to me. “He acted like I was not in the room,” she said, referring to her ophthalmologist. “He talked to my girls like I wasn’t even there. His behavior was simply unacceptable. No one can keep me from driving. I want my car back. There is nothing that suddenly went so wrong with my vision that I can’t drive.”

In this case, it wasn’t my patient’s vision that prompted taking away the car keys—it was her dementia. Mary’s daughters had asked the ophthalmologist to tell Mary her vision was impaired to keep her from driving.

Mary was the unwitting victim of the medical profession’s difficulty understanding the variability characteristic of Alzheimer’s disease. Having worked in the field of neurology and dementia for more than twenty years, I believe more and more that Alzheimer’s is not a single disease entity, but rather a spectrum disorder that presents with different symptoms, progresses differently, and responds differently to treatment, with different prognoses, for each person. Mary’s Alzheimer’s was different from the Alzheimer’s that affected Jack or Jill or Mike, just as Susan’s stroke was different from Sam’s. Post-stroke, Susan may be able to drive but unable to speak, whereas Sam may be able to give a toast at the Friars Club but needs crutches to get up to do so. Alzheimer’s too affects different parts of the brain in different people, despite the fact that almost everyone with the disease eventually develops significant memory problems. So Mary’s driving skills may have been unaffected by her Alzheimer’s even though she may have trouble finding words. And Jack may have had some fender benders as the result of his Alzheimer’s, despite remaining the life of the party. Jill’s Alzheimer’s may progress rapidly and aggressively, while Mike’s might progress slowly.

Unfortunately, the differences between the various subcategories of Alzheimer’s are lost when patients get tossed into the general diagnostic inbox. Although some patients with Alzheimer’s become completely immobilized, most patients on the spectrum are living in the community, babysitting a grandchild, finishing up chores, or possibly even running for president of the United States (as we will read later). However, because Alzheimer’s is still a poorly understood disease and because one’s recall bias tends toward severe cases, the people we remember with the condition are often mute and using a wheelchair, suffering from advanced illness. When we think about the condition, we will not recall the absentminded storekeeper or the lawyer who did a good job with cross-examining the witness on the stand. We have not yet learned to associate Alzheimer’s disease with functioning individuals, although this is, in fact, the majority of patients.

Time and again, patients and caregivers who are worried about the potential ravages of Alzheimer’s or another form of dementia make decisions based on fear or emotion, rather than on facts. I’ve come to realize that it is not only patients and family who react in this manner to a diagnosis of dementia—physicians and other health caregivers do too. I have been as guilty of this as anyone else. Patients themselves, confused and unsure about what to expect, may decide to fold up their lives like used notebooks and file themselves away. In allowing this to happen, we are doing ourselves and society a disservice, depriving patients with dementia and their communities of years of fulfillment, pleasure, and purpose-driven lives.

As I mentioned, I view Alzheimer’s as a spectrum disorder. Furthermore, Alzheimer’s is a multifactorial disease, which means that there can be many reasons that someone develops symptoms. In some cases, genetics may play a role, but lifestyle choices and myriad other factors can also lead to the condition. That one of a set of identical twins can get Alzheimer’s while the other stays healthy is testament to this fact.
Because so many factors can contribute to a person developing symptoms—and because Alzheimer’s presents differently in each person—I believe in a treatment approach that is tailored to the person and the subtype of disease they have. One size does not fit all for diabetes or strokes, which are other multifactorial illnesses, and one size does not fit all for Alzheimer’s.

In the sixteen chapters that follow, I address a variety of common issues that come up in the care of patients with Alzheimer’s and other dementias and attempt to answer the many poignant questions that I have been asked over the years.

“Should I tell my family and friends about my diagnosis?” a grandfather of four asks.

“I love what I do! Can I keep working?” asks a surgeon.

“Can I stay in my apartment? Or do I have to move into a home?” wonders an 80-year-old woman without any family.

“Should my children take over my finances?” asks the meticulous accountant.

“If it’s not safe for Mom to drive, how can I tell her in a way that doesn’t break her spirit?” Mary’s daughter asks.

“Alan has become paranoid,” his wife tells me. “He thinks I am stealing his money. Why would I do that after forty years of marriage? It makes me so sad that he would think that! What should I do?”

“She screams when she gets into the shower, and it breaks my heart,” a concerned husband says.

“He doesn’t think he has any problems with his memory. He won’t go to the doctor!” a son says in frustration.

“Sally keeps asking to go home, even though we are at home,” Ed says.

The questions and concerns are endless. I try to be prepared with answers wrought from science and experience.

The fundamental question is this: How can a person maintain dignity even as aspects of who they are begin to fragment and dissolve? In pursuit of an answer, I have filled the pages that follow with practical advice on how to tailor one’s approach to Alzheimer’s and other types of dementia to suit the patient and their particular Alzheimer’s experience. My goal is not to paint a rosy picture of Alzheimer’s but a realistic one based on my practice. 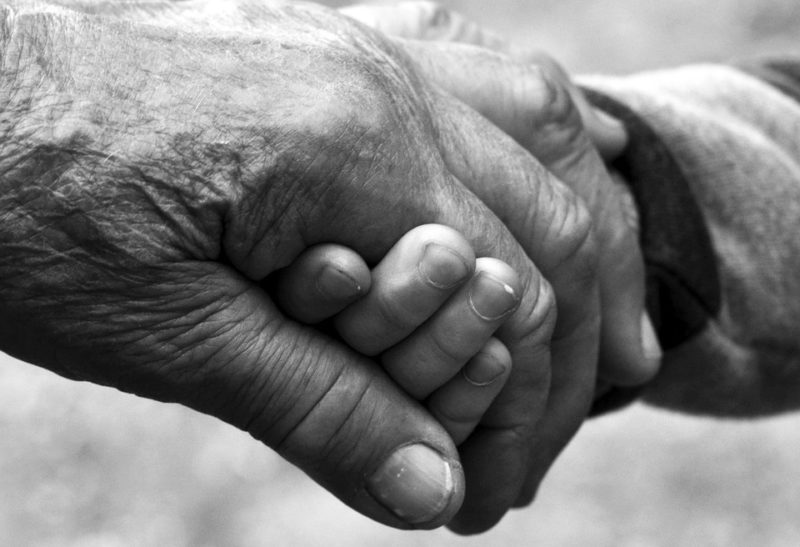 I approach the subject of Alzheimer’s personally, highlighting dilemmas I’ve encountered with real-life patients, caregivers, and situations over the course of my two-plus decades in practice. I also draw upon my experience serving as a consultant to New York State’s Committee on Physician Health, where I assess the competence of our licensed physicians with cognitive issues and dementia. The information in this book will be helpful to both patients and their caregivers.

To protect my patients’ and their caregivers’ privacy, I have changed all identifying information. I am a rather formal person in my practice, preferring to address patients as Mr., Ms., Doctor, or Professor, but for the purposes of the book, I’ve given most patients first names for ease of reading.

Dementia is an umbrella term addressing all types of progressive cognitive loss, whereas Alzheimer’s is a particular type of dementia and the most common. However, throughout the book, I use the terms Alzheimer’s and dementia interchangeably.

The first several chapters deal with these questions: Do I have Alzheimer’s disease? If yes, then what? How do I treat it? Whom should I tell? Can I keep working? Can I keep living in my home? Are there any specific challenges that women with memory loss face? Will I pass this on to my children and grandchildren?

The second set of chapters deals with some of the common symptoms that accompany Alzheimer’s and how best to address them, as patients and as caregivers. Such symptoms can include depression, anxiety, apraxia, paranoia, personality changes, and wandering behavior. Then there are a couple of chapters that focus on the challenges that caregivers face, including loneliness, depression, and often, a profound sense of guilt.

Next are chapters on end of life, which frankly apply to all of us and not just those of us with Alzheimer’s. Here we look at whether medical illnesses are better treated at the hospital or at home as we age, how to deal with our idiosyncrasies as we get older, and how to die at home, which is what most of us prefer. Finally, I end with my own reflections as a physician taking care of patients with dementia, exploring how a field that many consider depressing has given me joy, solace, and fulfillment over all these years.

My purpose here is not to produce a comprehensive and exhaustive tome that covers every aspect of Alzheimer’s, but rather a profoundly personal volume that deals with the most common daily problems that patients and their families encounter in their journey through life with dementia. I aim to address these problems from a patient-centered perspective that may not be as readily available in other comprehensive texts, and in doing so, I hope to be able to change the way people view the disease.

Finally, I would like to apologize in advance should I offend anyone’s sensibilities, whether caregiver or patient, with my points of view. The opinions here are mine alone. As one of my wonderfully wise mentors, Dr. Roger Cracco, who was then chairman of the department of neurology, told me in the first month of my medical internship twenty-nine years ago, “Gayatri, fifty percent of what you are taught in medicine is wrong and fifty percent is right. The problem is, none of us know which is which. Only time will tell.” This was humbling, coming from someone so accomplished and learned, and it is a lesson I keep close to my heart. So forgive me my transgressions, which are based on what I currently believe to be true.