A Joan of Arc Story for Kids

Who was Joan of Arc, and how did she become a Catholic saint?

In this version of the Joan of Arc story, illustrated and abridged for readers age 10 and up, you will meet Joan of Arc, whose transcendent faith compelled her to lead an army when the king’s courage failed. In Stories of the Saints by Carey Wallace, the saints come alive in vivid retellings of ancient tales. This classic and compelling Joan of Arc story for kids, is just one of the dozens of lovingly-told histories in Stories of the Saints.

Excerpted from Stories of the Saints: Bold and Inspiring Tales of Adventure, Grace, and Courage by Carey Wallace, illustrated by Nick Thornborrow. Copyright © 2020. 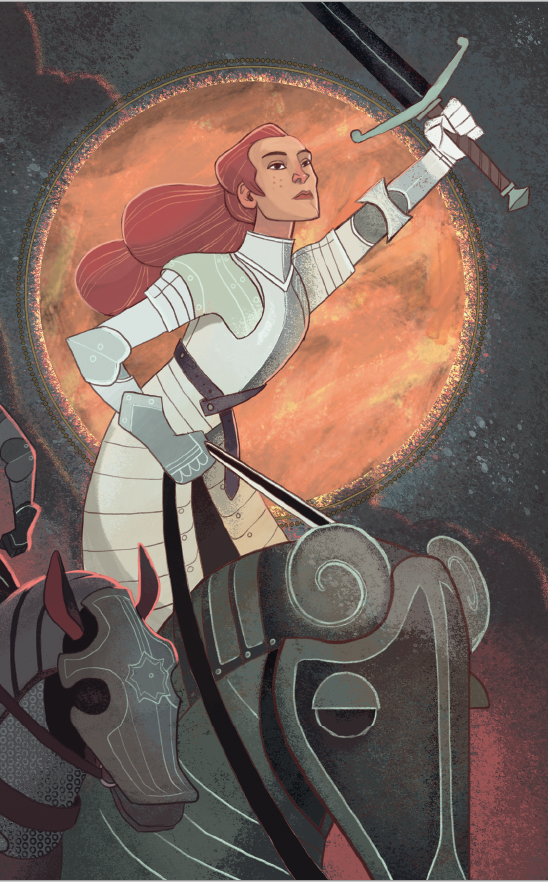 PATRON: of the military, prisoners, people ridiculed for their faith, France

When Joan was born on a small farm in France, her country had been at war with England for almost a hundred years. The English kings wanted to rule France, and they’d won battle after battle, taking over French lands. The farm Joan grew up on was far from these battles.

But when she was thirteen, playing in her father’s garden, creatures of blinding light appeared among the flowers. They were so beautiful that when they disappeared, Joan wept. But they kept coming back.

At first, they gave her simple messages. “Do good,” they told her. “Don’t forget to go to church.”

Slowly, Joan began to recognize them: One was the archangel Michael, the leader of God’s armies, and with him were Saint Margaret of Antioch and Saint Catherine of Alexandria. As she recognized them, their messages began to change. Instead of just telling her to be good, they told her that she was destined to play a part in a vast drama. It was her job, they told her, to lead the French army against the English.

“I don’t know anything about war!” Joan protested.

“That doesn’t matter,” the voices told her. “This is God’s will.”

As soon as they got there, the messengers proved Joan right. The battle at Rouvray had been a disaster for the French. There was no way on earth Joan could have known that, but somehow, she did. So the garrison commander sent her to the king. And to protect her on the way, he had her dress in disguise as a soldier.

The king, Charles, wasn’t eager to meet with this strange girl when she arrived. He kept Joan waiting for two days. Then he put on a disguise of his own, so she wouldn’t be able to tell that he was the king when she came into court. But despite the fact that the room was full of people and Charles wasn’t dressed as a king, Joan walked right up to him.

Joan and Charles both knew that the story she had come to tell him sounded crazy. Why would God tell a king to put a farm girl who couldn’t read in charge of all the men in his armies? But nothing else the king had done had worked, for years. He was the rightful king of France, but the English still refused to recognize him, and were still fighting to take away his land. So by now, Charles was willing to try just about anything. For months, the city of Orleans had been under siege by the English. “If you can lift the siege of Orleans,” Charles told Joan, “the armies of France will follow you.”

Charles gave Joan a horse and a suit of white armor. He tried to give her a sword, as well, but the voices that spoke in Joan’s mind told her not to take it. Instead, they told her to go look behind the altar in the chapel of Saint Catherine. There, just as the voices had said, Joan found a buried sword. She rode up to Orleans in a suit of white armor, under a banner that read “Jesus” and “Maria.”

In the five months before she arrived, the French had only fought one battle to lift the siege. But as soon as Joan got there, the French attacked an English fortress near Orleans, and captured it. Then they captured another one, and another. The English came pouring out to defend themselves. But the French cavalry chased the English right back into their forts.

Then they turned their attention to the big prize, Orleans, with a swift surprise attack. Just nine days after Joan took the field, the English fled and the siege of Orleans was lifted. Suddenly, Charles and his advisers wanted to hear everything else Joan had to say.

“The English must leave France,” Joan told them. “We must fight our way to Reims and show the world that France belongs to the French by crowning Charles there as our French king.”

Reims was deep in English-held France. Getting there would require the French to win battle after battle, when for years all they had done was lose. But under Joan’s leadership, the French army tore through the countryside, reclaiming bridges, liberating French towns from English rule, and capturing most of the English commanders. Ahead of them, the English army fled, in shambles.

Just months after Joan took leadership, the French army swept into Reims, as she had predicted. Joan, dressed in her white armor and carrying her banner, stood beside Charles as he was crowned king.

But once the king was crowned, he wasn’t as eager to listen to Joan. She told him to make a quick march to capture Paris, but the king tried to negotiate a truce instead. While the king waited, the English built up their reinforcements in Paris. So when the French finally did attack, they were driven back. In the fight, Joan was wounded.

As soon as Joan recovered, she went straight back to war. But in the heat of another battle, her men ran ahead of her to cross a drawbridge. They all made it safely, and began to raise the bridge to keep the English from following them. But as the bridge rose, Joan was left behind, still stuck on the wrong side of the riverbank. And as soon as the English found her, they took her captive.

The English were thrilled to discover they had Joan in their clutches, but she didn’t make it easy for them. When they put her in a seventy-foot tower, she jumped out of it, into the dry moat below. But each time she escaped, the English captured her again, until finally they put her on trial in the town of Rouen.

At her trial the church judges, who were English, tried to trick her with difficult theological questions. “Are you in God’s grace?” they asked her. Joan couldn’t say yes, because no one can claim they know what God thinks. And she couldn’t say no, because then she would condemn herself. “If I’m not,” she said, “may God put me there. And if I am, may God keep me there.”

But even though Joan baffled them with her answers, the court found her guilty of heresy and sorcery, and condemned her to die at the stake. The first time the soldiers led her out to be killed, Joan’s courage failed in the public square. Had it really been God who spoke to her? Did she believe in what she had heard enough to die? “I take it all back,” she said. “Just don’t kill me.”

But after a day, she told her captors that she still believed everything she had said, and that she would never take it back again, even if they did kill her. So just seven days after her trial, when Joan was only nineteen years old, she was tied to a pillar in the marketplace, wearing a long white dress.

Joan asked two priests to hold a crucifix for her to see. As the flames rose around her, her prayer was simple: She just kept repeating the name of Jesus. And as the fire engulfed her, an English soldier saw a white bird rise up out of the pyre.

The English were so afraid of Joan that they burned her body twice more, then threw her ashes in the Seine River, although some people say her heart was found whole in the ashes, untouched by the flames.

But the English couldn’t keep Joan’s prophecies from coming true. Before she died, Joan predicted that within seven years the English would suffer a much worse defeat than the one she had led at Orleans. That came true when Henry VI lost the Battle of Paris, six years after she died.

And the English couldn’t stain Joan’s name forever, either. After Joan died, another church court cleared her of all charges. In fact, they used the same evidence that had once been used to condemn her to declare her a saint.

More About Stories of the Saints: 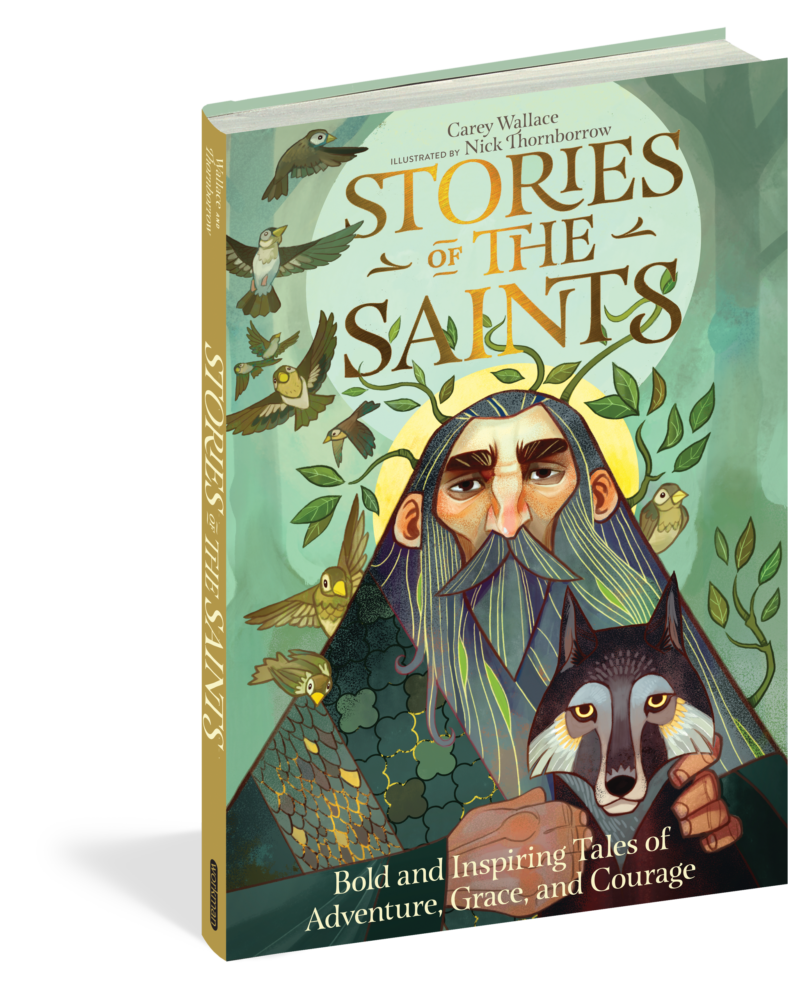 From Augustine to Mother Teresa, officially canonized as St. Teresa of Calcutta, discover seventy of the best-known and best-loved saints and read their riveting stories.
Meet Joan of Arc, whose transcendent faith compelled her to lead an army when the king’s courage failed. Francis of Assisi, whose gentleness tamed a man-eating wolf. Valentine, a bishop in the time of ancient Rome, who spoke so often of Christ’s love that his saint’s day, February 12, has been associated with courtly love since the Middle Ages. St. Thomas Aquinas, the great teacher. Peter Claver, who cared for hundreds of thousands of people on slave ships after their voyage as captives. And Bernadette, whose vision of Mary instructed her to dig the spring that became the healing waters of Lourdes.

Each saint is illustrated in a dramatic and stylized full-color portrait, and included in every entry are the saint’s dates, location, emblems, feast days, and patronage. Taken together, these stories create a rich, inspiring, and entertaining history of faith and courage. For kids age 10 and up.

A perfect gift for Confirmation.

gifts for kids
May 26, 2020 By Workman Publishing
Calm Parenting Techniques for Turbulent Times You're invited to Indie Shindig!