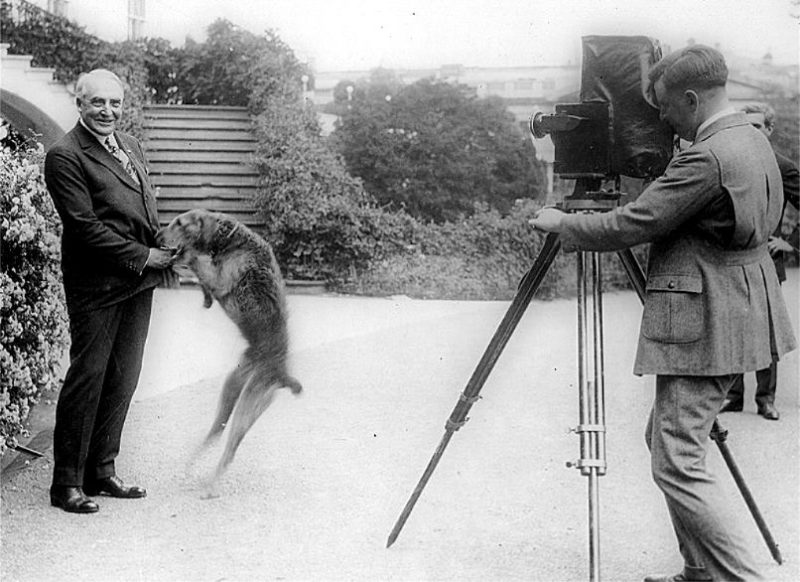 Warren Harding once said, “I am not fit for this office and should never have been here.” And he probably was right. Yet his triumph by a huge majority in 1920 signified an end of the progressive era and a moratorium of reform. “Return to Normalcy” had been his Republican campaign theme. A handsome man who was devoted to his dogs, this president relied on canines to abet his campaign and later to help lead him out of a political morass.

The Hardings came to the White House with an English bulldog named Oh Boy. He was a sickly little creature and soon died. But his replacement, the Airedale Laddie Boy—or Caswell Laddie Boy, his full pedigree name—became the President’s constant companion and a White House celebrity.

Laddie Boy knew the President by his first name. First Lady Florence Harding would hand the dog the morning newspaper and say, “Take this to Warren.” Then with the rolled-up paper clenched in his teeth, the dog would trot off the find his master. Laddie Boy would also participate in the President’s favorite pastime, happily retrieving his golf balls out on the White House lawn.

This animal, unlike all the presidential dogs before him, got involved in the workings of the government. Not only did he have his own hand-carved cabinet chair and sit in on high-level meetings, he was also often on the front steps of the White House to greet official delegations. Although he was so well known to reporters that they frequently quoted him in mock interviews, Laddie Boy failed to deflect attention from the excess that soon engulfed the Harding administration—scandals and payoffs that were part of Harding’s “Spoil System.”

Once Harding even tried to use a fictitious correspondence between Laddie Boy and a vaudeville dog name Tiger to defend his loyalty to several presidential appointees who turned out to be defrauding the government. Published in a political magazine called The National, a letter from Tiger commended Laddie Boy for sticking by his master through thick and thin. Laddie Boy then replied that both man and dog could be undone by people who used friendship for their personal gain. Harding’s Airedale was thus echoing the anguish of his beleaguered master, who once remarked: “My God, this is a hell of a job! I can take care of my enemies all right. But my damn friends…they’re the ones that keep me walking the floor nights.”

Despondent and in poor health, the President and his wife took off in 1923 on a ross-country speaking tour ending in Alaska. He fell ill on the way home and died in San Francisco. Back in the White House, Laddie Boy was said to have sensed something was wrong and howled for three days just prior to the President’s death.

To avoid the pain of being constantly reminded of her late husband, the First Lady gave Laddie away to the Secret Service agent who had guarded him on the fateful trip to Alaska. Though Harding served barely two years and a one of the country’s least successful chief executives, his death produced an outpouring of national grief. As a result, the Newsboys Association decided to present Mrs. Harding with a remembrance of the President’s famous dog. Some nineteen thousand members each chipped in one penny to be melted down and cast in a statue of Laddie Boy. Unfortunately she, too, died before sculptor Bashka Paeff completed the piece, which now resides in the Smithsonian. 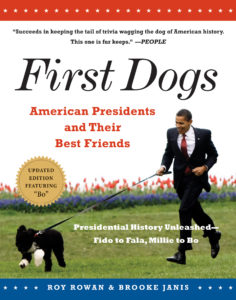 “If you want a friend in Washington, get a dog,” Harry Truman once said. Perhaps that’s why, for much of our Republic’s history, there have been two top dogs at 1600 Pennsylvania Avenue—one with two legs, one with four. First Dogs, by distinguished journalist Roy Rowan and researcher Brooke Janis, tells the whole doggone story, from the days before there was a White House to Barack Obama’s newly adopted presidential pup, Bo.

Here’s a lighthearted romp through American history, packed with drawings and paintings from early America, plus photographs, starting with Abraham Lincoln’s Fido. Not only did these four-footed goodwill ambassadors humanize their distinguished masters, they offered them a little unconditional love in a loveless town.

First Dogs gives dog lovers and history lovers a new angle on presidential history and is more fun than you can shake a stick (or rubber bone) at.