We asked Sean Connolly, author of the upcoming The Book of Massively Epic Engineering Disasters, to weigh in on the great STEM vs. STEAM debate going on in schools across the country, and how to get kids more excited about science.

Scroll down for the full interview, and check out more of his imaginative books for young scientists and mathematicians here. 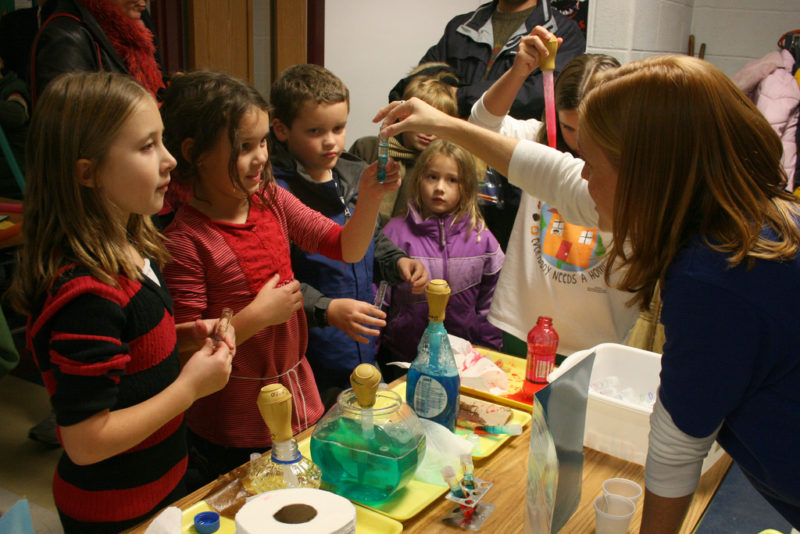 What’s the main difference between STEM and STEAM? Why is this an important debate? And where do you fall on the topic?

This, obviously, is a huge debate with lots of sound reasoning on either side of the big divide (the divide, as I see it, centering on whether the addition of Arts broadens or dilutes the good work done by STEM initiatives).

As a writer (which is, after all, a creative and often artistic pursuit) dealing with science and math (STEM stuff), I do come down on the side of inclusion. I don’t think that these areas present an “either or” position—a zero-sum game, in which more knowledge in one area diminishes knowledge in the other.

But beyond gut instinct and theory, there does seem to be hard evidence that people who might have seemed “pure STEM types” (Madame Curie, Albert Einstein, Robert Oppenheimer, Steve Jobs) approached their work creatively. On the flip side, Anton Chekhov and the poet William Carlos Williams were qualified doctors—their creativity flowed in both directions.

And how about the subatomic particle known as the quark? Why, it was named by the great physicist Murray Gell-Mann in honor of James Joyce’s Finnegans Wake (which lots of English majors have trouble finishing).

How did you get into science as a kid? What’s the area of science you gravitated toward?

I grew up just outside Boston, where local kids are encouraged to take part in Saturday activities at Massachusetts Institute of Technology (MIT). The spirit is fun and inclusive, and for me it was the best way to remove any sense of “Them and Us” when I think of scientists and the  general public.

My real love was—and remains—astronomy and I still recall the thrill I had seeing the Moon’s craters and Saturn’s rings with my own telescope, while my father waited patiently behind me stomping his feet and blowing on his hands on winter nights.

How do you think schools can get kids, especially girls, more excited about the sciences?

By reading my books!!!

Seriously, one of the best compliments I’ve been paid (and I’ve had it a lot on book tours) is, “Your books get girls interested in science and boys interested in reading.” As the father of girl-boy twins, I am 100% behind any initiatives that draw girls (or boys) away from perceived comfort zones.

A lot of this ties in with the whole STEM/STEAM business. One really strong argument for STEM is that engineering, tech and science jobs (and math) tend to be dominated by men. If more support is given at ground level for boys and girls, then women will start picking up these jobs . . . and becoming role models for future generations.

Just think of soccer. Twenty or thirty years ago, it was considered a boys’/men’s sport, but by concentrating on inclusivity and girls’ competitions, the USA has a world’s best women’s team.

Does making science “dangerous” make it more appealing? Why?

A lot of it boils down to psychology. I was going to write “child psychology” but I think it’s broader. Think of an activity like bungee-jumping. How many takers would you get if you advertised it (accurately) as “a well-regulated activity conforming to the highest safety standards”? It’s a hook.

Words like “Dangerous” and “Catastrophic”—in relation to science—also act as hooks. Draw them in and they’ll look beyond the initial thrill-seeking to find inspiration and beauty.

If you could pick one project from your upcoming book, The Book of Massively Epic Engineering Disasters, to get reluctant young scientists engaged, which one would it be? Can you describe it?

OK. Here’s one that I included in the chapter about the Great Molasses Flood of Boston in 1919. Yes—you did read right. It really did happen, and it was deadly. The molasses was held in a huge wooden vat, about the size of those big gas tanks that you still see.

Well, the chapter talked about the stress and huge pressure of all that molasses and how the stays weren’t strong enough. Those were real examples of engineering disasters and there’s a neat experiment readers can do about pressure buildup. But the other experiment was so simple that I thought it was almost cheating to include it . . . until Danny Cooper, my editor, convinced me otherwise.

It boils down to this. We all know that molasses moves slowly, right? Well, the molasses in the flood hurtled along at about 35 miles per hour. That’s because—like ketchup—molasses is a non-Newtonian liquid. It behaves very differently, flowing much more freely, under sudden pressure.

The experiment goes like this. Lay a tube of toothpaste, opened, on the floor or ground. Then stomp on it! The toothpaste goes flying. Why? Because it’s a non-Newtonian fluid and you’ve just applied the pressure. From toothpaste to Isaac Newton in just a few seconds. That should get a reluctant young scientist engaged.

This book is all about projects that went wrong. Why is the idea of failure fun/instructive for kids?

Science and technology (and cooking, for that matter) are full of examples of breakthroughs emerging from what seemed to be failures. X-rays, penicillin, and even awareness of the Big Bang came about indirectly while scientists were trying to find something else.

So much of science depends on curiosity. And the ability to say, “Well, that didn’t work . . . I wonder why?” is often the first step toward an even bigger breakthrough.

What’s the most common question you are asked by students when you are giving school presentations?

That’s simple: “When did you start writing books?”

Which links to my opening lines whenever I visit a school:

“Hands up anyone who has to do homework.”

“Hands up anyone who gets paid to do homework.”

I keep my hand up, along with some teachers (and occasionally one or two students!). There’s not a lot of difference between planning an essay or exam answer and doing the sort of research and writing that I do. So, in a way, I started when I was their age. I like to think that it helps break down barriers when they view it in those terms.

And if things go well, they can also break down the barrier between “us” and “scientists”: because we all are scientists, or we can be.