And the Winner is…

Calling all cornbread lovers! Last week we held a cornbread bonanza – we posted three different recipes from Crescent Dragonwagon’s authoritative cookbook, The Cornbread Gospels, highlighting the three different schools of cornbread cooking. We also offered up two 8-inch Lodge Cast Iron Skillets up for grabs and asked YOU to answer a contentious question: Which school of cornbread is your favorite: Southern, Yankee, or African-American?

The results are in! The winner is… 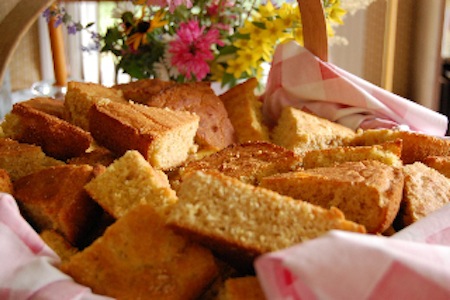 Sizzled in a skillet then baked in an oven, without any additional sweetness or bells and whistles, true Southern cornbread is simple, gritty, and delicious. Like Truman Capote’s Family’s Cornbread, Southern Cornbread is a classic, hearty treat. In our giveaway, 461 people voted Southern Cornbread as their favorite (with just 150 votes combined for the other schools of cornbread cooking).

Nowhere in America are people as passionate, proud, and particular about cornbread as in the South. And though Southerners often disagree region to region as to exactly what constitutes good cornbread, they are generally adamant on two points: 1) Yankees just can’t, cannot, make good cornbread, and 2) their mother/grandmother makes or made the very best cornbread ever. At times Southerners can get downright belligerent. Mark Twain did, (in)famously: “Perhaps no bread in the world is quite as good as Southern corn bread, and perhaps no bread in the world is quite so bad as the Northern imitation of it.” So much are cornbread and the region intertwined that I don’t know of a single narrative that takes place in the South, fiction or non, in which you don’t come across characters eating, making, serving, or referencing cornbread at least once.

Congratulations to the winners! We’ll be contacting you shortly with your prizes. Thank you to everyone who entered the sweepstakes – and stay tuned, as we’ll have plenty of other prizes for aspiring chefs and cookbook-lovers next month.