Welcome to our #FridayReads feature on the blog, where we’ll be excerpting a chapter of one of our favorite books to start your weekend. This week, it’s bestselling author Gayle Forman’s Leave Me, a big-hearted novel about facing the fears we’re all running from. 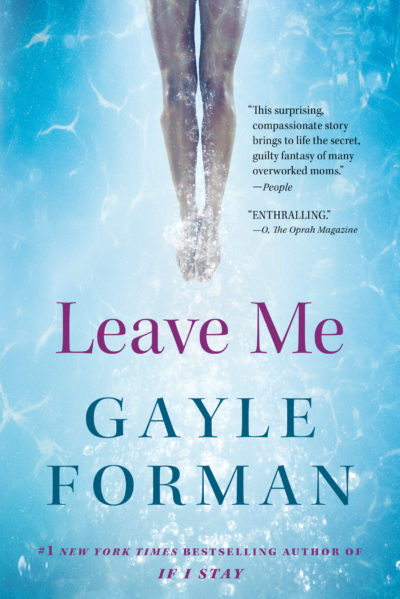 Maribeth examined the monitor on her finger. A Pulse-ox. She recalled her father wearing one after his stroke. The monitors taped to her chest itched; she suspected it would take a good scrubbing tonight to get the glue off. “Excuse me,” she called to one of the ER residents, a stylish young woman who wore expensive shoes and spoke with a Valley Girl lilt. “Do you know when I might get out of here?”

“I think they, like, ordered another blood draw,” the doctor said.

More like covering their asses or padding the bill. Maribeth had once edited an exposé about profit-driven hospitals.

With that she remembered the piece Finoula had sent. She might as well cross something off her list. She pulled it up on her phone. It was an interesting premise—about celebrities who were harnessing social media for philanthropic purposes; Maribeth vaguely recalled suggesting it in a pitch meeting—but it was terribly executed. Usually, Maribeth could read an article and immediately see the problems in structure or logic or voice, and know how to fix them. But she read the piece a second time, then a third, and couldn’t see the forest for the trees, couldn’t see how to make it right.

It was the hospital. Hardly a conducive workplace. She needed to get home. It was almost dinnertime. Jason would probably be back with the kids by now. He might even start to, if not worry, then wonder. She closed the article and saw several missed calls from the landline. She called and Jason answered almost right away: “Maribeth,” he said. “Where are you?”

The sound of Jason’s steady, sonorous voice shook something loose in her. Maybe because his phone voice resembled his radio voice, it still had the power to ricochet her back 25 years in time, to those nights when Maribeth and her friends would listen to his Demo-Gogue show from their dorm and muse over who he really was (his on-air name was Jinx) and what he was really like. “I’ll bet he’s ugly as sin,” her roommate Courtney had said. “Hot voice, hideous face.” Maribeth, who worked for the college newspaper, had no opinions to his looks, but she was certain that he would be an unbearable snob, like all the art and music writers on staff were. “You should interview him and find out,” Courtney had dared.

“Where are you?” Jason repeated. Now she heard the irritation in his voice. And then she heard why. In the background was the clatter of adults and children. Many, many children.

“I thought you wanted me to make the chicken, but we don’t have any in the house and now people are here,” Jason said. “Are you getting food?”

“You forgot?” Now Jason sounded pissed. Which was understandable in a way but Maribeth found herself gritting her teeth because how many times had Jason spaced something leaving her to mop up the mess?

“Yes I forgot,” she said, her voice snappish. “I had other things on my mind, what with being stuck in the ER all afternoon.”

“Wait? What? Why?” His annoyance flipped to concern and Maribeth’s anger atrophied.

“I was having chest pains so Dr. Cray sent me just to get checked out,” she explained.

“What the fuck?” Now Jason sounded angry, truly angry, but in a different way from before. Like he was sticking up for her against a bully.

“I tried, but you didn’t answer and anyway, I thought I’d be out of here by now.”

“Not with everyone in the house. Just tell them I had work late and then order some pizza. They’re letting me out soon.”

“By the time you got up here, I’d be discharged. It was just an overblown case of heartburn.” In the background, she heard Oscar begin to cry. “What’s going on?”

Creepy Lovey was a defaced Teddy Bear that Oscar couldn’t sleep without. “Better get it back,” she told Jason. “And can I talk to him? Or Liv?”

As Jason tried to corral the children, her phone made that mournful tone sound, down to its last 10 percent, and then, a few seconds later, made another sad sound and died.

“I’ll be home soon,” she called. But they could no longer hear her.

An hour later a grandfatherly cardiologist wearing a polka-dot bowtie showed up. He introduced himself as Dr. Sterling and then told Maribeth: “Well, we got your blood work back and it showed some very elevated levels of troponin. So we’re going to admit you and send you to the cath lab for a closer look around. An angiogram and maybe an angioplasty and if you’re extra lucky, a stenting. My guess is that you’ve had a stuttering infarct. Pain comes and goes as your body tries to clear that old obstruction. Which is why it didn’t register on the earlier EKGs.”

“Oh,” Maribeth said, struggling to take it in. “When is all this happening?”

“Lickety split. As soon as we can get you upstairs.”

“Now?” She looked at the clock. It was past seven. “It’s Friday night.”

“You have plans to go out dancing?” He was amused by his joke.

“No. I just wondered if we could we do this, this angiogram thing, next week?”

“Oh, no. We need to get in there before any more damage is done.”

Damage. She didn’t like the sound of that. “Okay. How long does it take? I mean, when can I expect to get out of here?”

“My, my, are you always in such a hurry?” he asked. He chuckled again, but this time there was the slap to it, as if the underlying message was: I see how you got yourself here.

But at this very moment twelve four year olds were rampaging around her apartment. Someone was going to have to clean up after them, to find the goldfish crackers that Mo always stashed away in the closet, or the soiled diapers that Tashi always left in the kitchen garbage (because Ellery still would only crap in a Pamper). Someone was going to have to put Oscar and Liv to bed that night, read books, sing songs, do voices and collect all the potential bad dreams into a burlap bag so Liv wouldn’t have nightmares.

And that was just tonight. In the coming days, someone had to get the kids to their ballet classes, their soccer clinics, their speech therapy sessions, their playdates, their birthday parties. To take them shopping for their Halloween costumes, to the pediatrician for their flu shots, to the dentist for their cleanings. Someone had to plan the meals, buy food, pay the bills, balance the checkbook. Someone had to get it all done, while still getting all the work-work done.

Maribeth sighed. “It’s just I have a house full of four-year-olds and a very busy weekend.”

He stared at her for a long moment, frowning. Maribeth looked back, disliking him already, and that was before he said: “You do realize you’ve had a heart attack?”