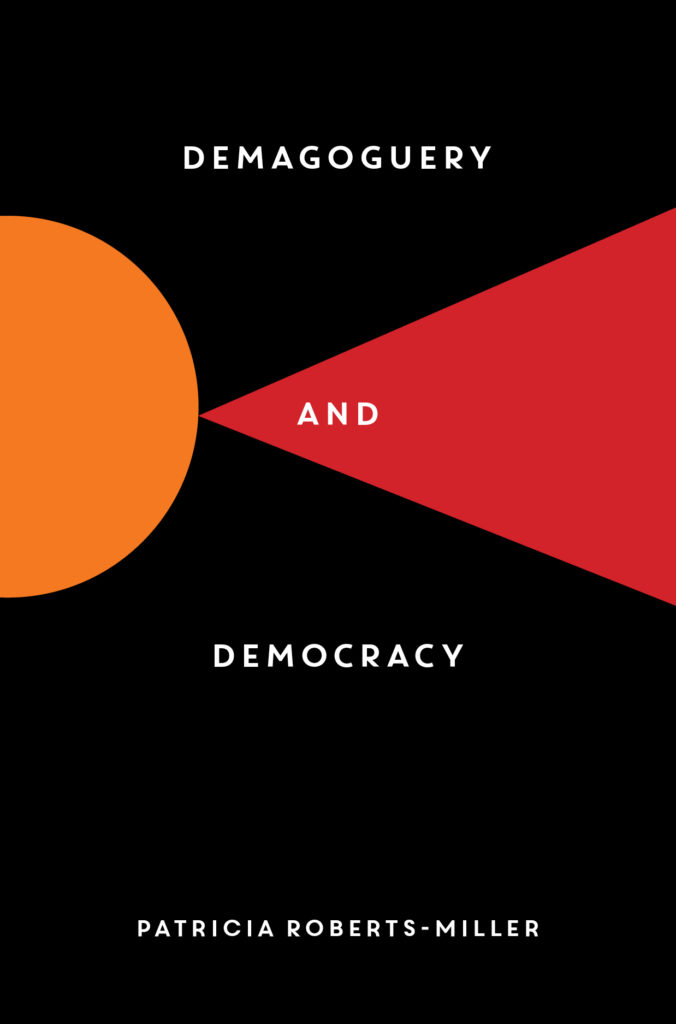 Q: First and foremost: What is demagoguery?

Patricia Roberts-Miller: Demagoguery is a way of avoiding arguments about policy by reframing them as issues of group identity—so, instead of arguing about whether a policy is necessary, feasible, likely to be effective, and so on, we argue about whether the people promoting it are good or bad. And that usually amounts to whether they’re us or them—so politics just becomes about in-group loyalty and scapegoating some out-group rather than solving our shared problem. There are a lot of specific characteristics it tends to have, including an appeal to binaries, motivism, fallacious arguments, etc. Emotionalism, populism, vehemence, and incivility aren’t necessarily part of it.

Q: Who are some of the most famous demagogues in history, and what about each qualifies him/her as such?

PR-M: There are some public figures about whom there’s agreement—Adolf Hitler, Father Charles Coughlin, Joseph McCarthy, Theodore Bilbo—but I think we make a mistake when we focus on demagogues rather than on demagoguery. There have been times when demagoguery was dominant, but there wasn’t really a main demagogue; there were lots of public figures engaged in demagoguery, such as the antebellum era in the US (especially the slave states), Weimar Germany, Athens toward the end of the Peloponnesian War, and the US now.

Q: Is demagoguery always bad? How can it be dangerous?

PR-M: There’s always some demagoguery around—you can see a lot of it about rival sports teams, or in YouTube comments about fans the commenter doesn’t like. It’s harmful when it’s our go-to method of arguing about everything, when there is a lot of demagoguery scapegoating the same group, or when a particular kind of demagoguery is being promoted by very powerful media or very powerful figures.

Q: The title of your new book is Demagoguery and Democracy, and at the end you say, “Democracy is hard; demagoguery is easy.” Can you explain how the two relate and interact?

PR-M: Demagoguery is a Greek word, and it initially just meant a political leader of the party of the “demes” (rather than the oligarchs)—it was a term of political affiliation. After Plato, some philosophers started using it in an exclusively negative way—ostensibly to mean someone who looked out for himself rather than the community, but really just to mean a political figure they disliked. That’s how it’s often used now—we have effective speakers; they have demagogues.

It isn’t specific to democracies—Stalin engaged in a lot of it, and it’s ubiquitous in fascist cultures—but it strengthens authoritarian governments and weakens democracies. Democratic deliberation requires that we are willing to take the long view on things, that we are willing to be wrong, to compromise, to listen to others, and to accept that people see things from different points of view; demagoguery rejects all that as dangerous dithering.

Q: How has demagoguery changed in recent history? Has the Internet, television, and social media changed the way demagoguery manifests?

The factionalizing of the American media means that more and more people are living in highly polarized and insular informational enclaves. The Internet, the abandoning of the Fairness Doctrine, even Google algorithms—all those things make it easier for people to inhabit a world of demagoguery and not know it.

Q: In the US, is demagoguery used by both Democrats and Republicans?

PR-M: It’s used by all sorts of people, and on all sorts of odd things. One of my favorite examples for teaching is an article by PETA, and I also use examples from YouTube, home security firms, young earth creationists, and pickup-artist websites. On the whole, demagoguery works better with people who self-identify as conservative rather than liberal (Air America failed, after all), but there are so many exceptions and qualifications that it’s more interesting to think in more specific terms.

Q: You talk about shaming several times in your book, and that’s certainly something we’ve seen a lot of in recent political rhetoric—can you explain how shaming is used in demagoguery?

PR-M: Demagoguery generally shames in-group members (“us”) for not being extreme enough in our support of the in-group, our commitment to hating “them,” and our loyalty to our group. But shame can be used to reduce demagoguery. Since demagoguery always violates the “do unto others” rule, and since virtually every ethical system has some version of that rule, one way that people have effectively reduced demagoguery in a culture, community, or dispute is to shame demagogues for treating others as they would never allow themselves to be treated. Making fun of demagoguery and demagogues is also pretty effective.

PR-M: Cognitive dissonance is probably inherent to the human condition, since we all have a lot of contradictions—things we’ve done that don’t match up with the sort of person we want to think we are, contradictory beliefs, blind spots, and so on.

Cognitive dissonance, if we acknowledge it, makes us uncertain. If we want to think in binaries (you’re either certain or clueless, you’re either good or bad, you’re either rigid in your beliefs or a whack-job relativist) then that uncertainty about ourselves and our beliefs raises a lot of anxiety. Demagoguery eases that anxiety by saying, “You didn’t make any mistakes, you didn’t do anything wrong, the world is not complicated and uncertain—IT’S ALL THEM!!”

Q: In your book you talk about our cognitive biases—how do these interact with demagogues’ ability to gain power?

PR-M: Beautifully. Cognitive biases amount to shortcuts in cognition, and demagoguery works because it appeals to them so effectively. One of the deepest cognitive biases is in-group favoritism: We think that people like us are inherently good, we’re likely to attribute good motives to people like us (and bad motives to people not like us) and interpret the same behaviors in many different ways. Thus, we don’t see demagoguery about them as demagoguery, because it confirms our perceptions of them so it must be true!

PR-M: Demagoguery exists on a spectrum, and it’s likely that there will always be some low-grade demagoguery, again, not necessarily political. A few scholars have argued that demagoguery can be useful for motivating a group that is nearly hopeless, a lot of literature and film resorts to demagoguery because a nuanced explanation of the initial situation would be boring, and people will use demagoguery to vent. A world with a lot less demagoguery would be more complicated, in that we’d have a lot more arguments about policy. I’m an argument nerd, so that seems like a really good world to me.

Q: What can we do to end and protect against demagoguery?

PR-M: I think we can first have a better argument about what demagoguery is. The commonplace definition—that demagoguery is speech by a demagogue, and a demagogue is someone who appeals to prejudices, emotions, and biases—is useless, and in fact excludes kinds of arguments (emotional, vehement, populist) that we need to include to make good decisions. It also doesn’t help us see when we are being suckered by demagoguery (or participating in it) because we never see ourselves as “prejudiced.” I think it’s best undermined by engaging in perspective-shifting—how would we feel if we were on the other side of this argument, this policy, this plot, and keeping in mind the “do unto others” rule. The more a culture or community operates by “do unto others” the less demagogic it is. 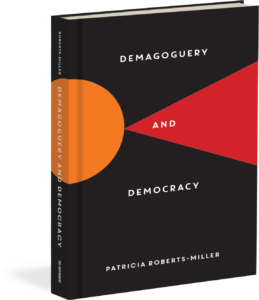 What is demagoguery? Some demagogues are easy to spot: They rise to power through pandering, charisma, and prejudice. But, as professor Patricia Roberts-Miller explains, a demagogue is anyone who reduces all questions to us vs. them.

Why is it dangerous? Demagoguery is democracy’s greatest threat. It erodes rational debate, so that intelligent policymaking grinds to a halt. The idea that we never fall for it—that all the blame lies with them—is equally dangerous.

How can we stop it? Demagogues follow predictable patterns in what they say and do to gain power. The key to resisting demagoguery is to name it when you see it—and to know where it leads.