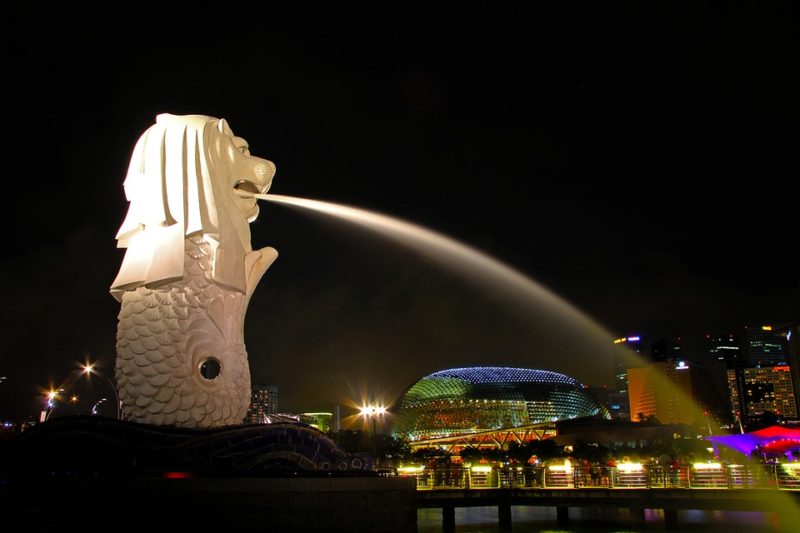 With a lion’s head and the body of a fish, the Merlion is Singapore’s icon.

Everybody in Singapore is on the move—on their way to Seoul, Sydney, or, in my case during a recent visit to Myanmar, Yangon. Just 3 hours from most Asian capitals, its award-winning Changi Airport hub invites a perfect stopover. More than 15 million visitors stop by this young and proud island nation annually (almost 3 times the population): Countless activities and attractions lure high rollers, shopping fiends, families, and food and culture pilgrims alike. 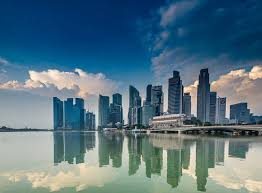 One of Asia’s great skylines

At the southern tip of the Malay Peninsula and one degree north of the equator, the diamond-shaped main island of Singapore (and dozens of surrounding islets) is just half the size of Los Angeles and the second smallest country in Asia after the Maldives. As efficient, air-conditioned, organized, grime-and-crime free, and visitor-friendly as this pint-size city-state is, it is also hot and steamy: The energy of Singapore is palpable (it is the largest port city in Southeast Asia), but so is its humidity.

Yet refrigerated respites are everywhere, in the massive shopping malls or the cool and stylish lobbies of striking new hotels, many rolled out in 2015 to celebrate the Lion City’s 50th anniversary of independence from Malaysia. Together with a host of sky-scraping wonders designed by international starchitects, they create one of the world’s great skylines. 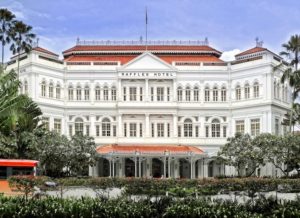 Vestiges of Singapore’s British colonial period are ubiquitously found. Perhaps its most famous is the grand Raffles Hotel, named after the British statesman who established the colony in 1819. Other colonial structures stand restored and repurposed, but it is the city’s sci-fi architecture that is so striking, such as the Marina Bay Sands—the triple-towered, 55-story mega property fronting the Marina Bay. Across the top and resembling a skybound boat is Sands SkyPark, where the world’s largest outdoor infinity pool offers what must be one of the world’s most stunning views. The giant lotus-shaped ArtScience Museum, one of the more recent manifestations of the government’s attention to culture, is overshadowed by the nearby Gardens by the Bay, a huge greenspace sitting on reclaimed land. At once spectacular and bizarre, its brightly lit artificial “supertrees” soar 80 to 160-foot high. The 541-foot Singapore Flyer, the city’s answer to the London Eye, stands just beyond. And it all somehow manages to be impressive and awesome rather than over the top and vulgar. 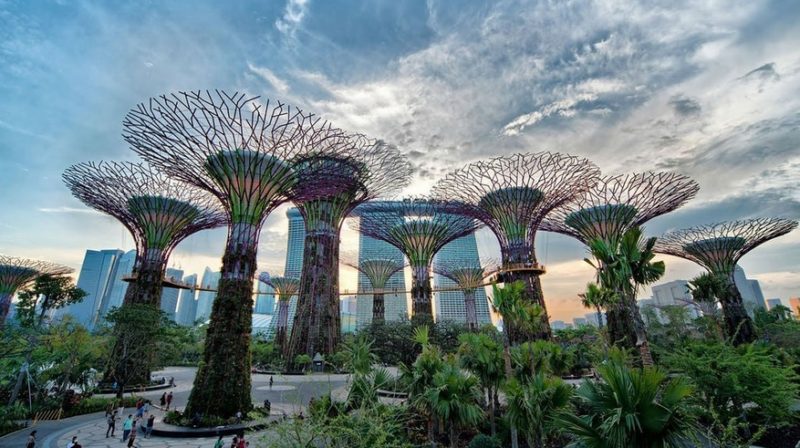 Singapore has been described as a Western-friendly “Asia for beginners,” and hotel-, food-, and retail-shopping Americans will recognize international brands and chains housed in new streamlined buildings. But much of the fun comes from aimlessly poking around its historic ethnic quarters—Chinatown, Little India, and Arab Street, whose atmospheric narrow backstreets, lined with old-school shophouses and early-morning markets, regale you with a heady introduction to the city’s smells, colors, and varied cultures. These still vibrant communities are responsible for Singapore’s rich and diversified food scene that is the irresistible draw here, making this melting pot one of the world’s unrivaled eating destinations. Conde Nast Traveler ranked it as the #1 Street Food City in 2016, above its Asian contenders Bangkok, Tokyo, and Hong Kong. 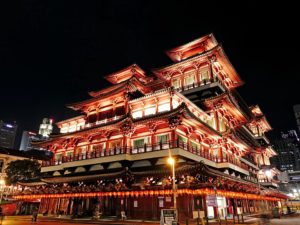 Celebrity-chef operations stand cheek by jowl with no-nonsense street food hawkers—Singapore is home to 100-plus hawker centers regulated by the government for cleanliness and safety. Here businesspeople join taxi drivers and young expats in what is clearly the country’s national pastime: eating. Among the steaming, sizzling, and simmering feast of Chinese, Malaysian, and Indian dishes are the can’t-miss specialties of chili-spiked crab and Hainanese chicken rice. 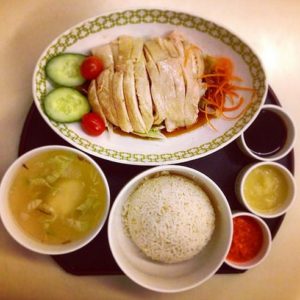 In 2015, its 183-acre Botanic Gardens was designated as a UNESCO World Heritage Site, the first garden in Asia and the first tropical garden in the world. Its National Orchid Garden is a veritable wonder with over 1,000 species and 2,000 hybrids—there is even a bloom named after Changi Airport. It is Singapore’s most impressive park, but in this tiny green-obsessed city-state that calls itself “A Garden Within a Garden,” it is not its only verdant oasis. Proof that Singapore is an ambitious work-in-progress nation that continues to evolve can be found in the new plans that have been confirmed for a 15-mile park—converting a British colonial-era railway line into an above-ground park not unlike New York City’s wildly popular High Line. It will cover the entire length of the island from top to bottom and enhance a quality of life widely considered the best in Asia. 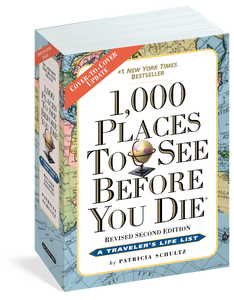 The world’s bestselling travel book is back in a more informative, more experiential, more budget-friendly full-color edition. A #1 New York Times bestseller, 1,000 Places reinvented the idea of travel book as both wish list and practical guide. As Newsweek wrote, it “tells you what’s beautiful, what’s fun, and what’s just unforgettable— everywhere on earth.” And now the best is better. There are 600 full-color photographs. Over 200 entirely new entries, including visits to 28 countries like Lebanon, Croatia, Estonia, and Nicaragua, that were not in the original edition. There is an emphasis on experiences: an entry covers not just Positano or Ravello, but the full 30-mile stretch along the Amalfi Coast.

Every entry from the original edition has been readdressed, rewritten, and made fuller, with more suggestions for places to stay, restaurants to visit, festivals to check out. And throughout, the book is more budget-conscious, with starred restaurants and historic hotels such as the Ritz, but also moderately priced gems that don’t compromise on atmosphere or charm.