Heartland of the Fabled Silk Road 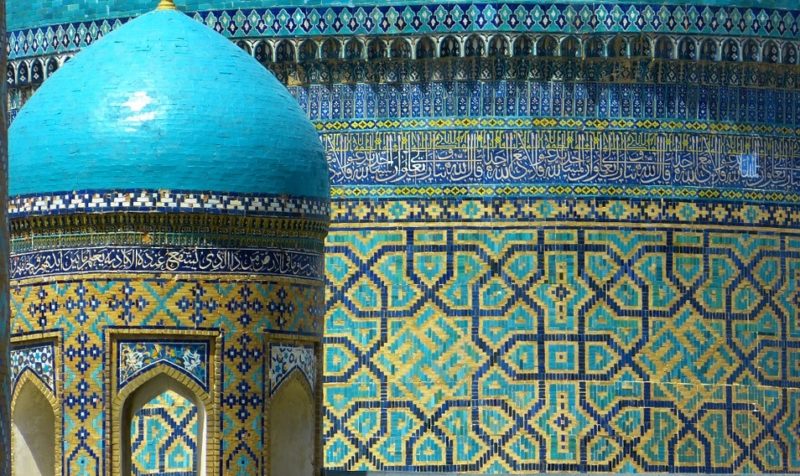 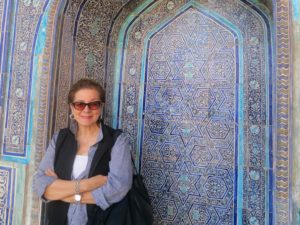 I doubt that most, or any, of the five independent republics I recently visited—Kazakhstan, Kyrgyzstan, Tajikistan, Turkmenistan and Uzbekistan—could be found on a map by the average traveler. Yet tourism to this middle-of-nowhere destination in Central Asia is increasing, encouraged by a slow-but-steadily-growing recognition of its wonders and improving infrastructure. Stable and scenically spectacular, the “Stans” have long been known for their hospitality here in the heartland of Asia: it is the stuff of legend—ask Marco Polo. 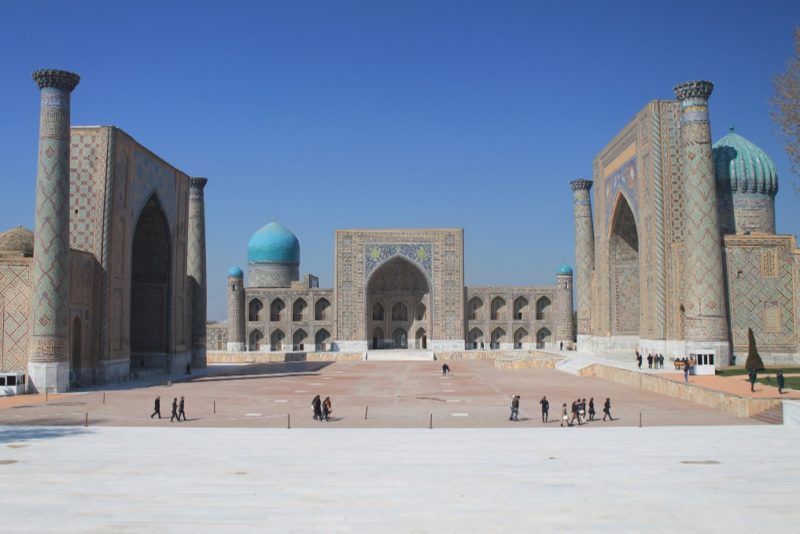 The Registan was the center of life in Uzbekistan’s ancient city of Samarkand.

Slightly smaller than California, Uzbekistan is the most visited of them all. It is the region’s cradle of culture, its undeniable showstopper and biggest draw. Despite being a tightly controlled state with a dubious human rights record, it is an oddly endearing and extremely friendly country whose brightly garbed people have a special love for Americans (although there are few to be seen). Independent travel is possible, but I joined a small group organized by Seattle-based MIR Travel Corporation—its name means “peace” and “world” in Russian—whose excellent guide Michel Behar, with his profound knowledge and passion for the people and their rich history, promised a memorable experience free of the myriad challenges that can often compromise travel to this region of the world. 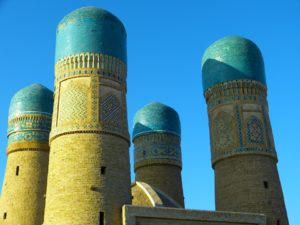 Uzbekistan had always conjured up for me romantic images of fluted domes of shimmering turquoise tiles, timeless walled cities, and caravansaries teeming with weary Silk Road merchants and their two-humped Bactrian camels laden with precious cargo. Those dreamy images got put on temporary hold when we arrived in its clean and contemporary capital city of Tashkent, with its curious mix of uninspired Soviet-era buildings and impressive modern architecture, leafy parks, and a population of 2.2 million—the most populous city in Central Asia’s most populous country. 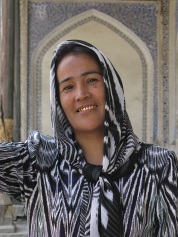 Smiles with golden teeth are common and heartfelt.

Central Asia has long been predominantly Muslim, having survived the religious oppression imposed by the Soviets. Today these five Stans rank among the most secular Muslim countries in the world. Women generally dress modestly, but faces are never covered and colorful head scarves, jewelry, and makeup were observed everywhere. Gold-covered teeth are proudly sported by both women and men and we saw plenty of them, as the people smile easily and genuinely.

The Silk Road reached from the Far East to the Mediterranean and on to all of Europe and beyond (as well as the reverse). It is a fascinating story, particularly when noting that our modern-day transport was following in the very tracks of the caravans of early merchants, traders, and conquerors who had come before us. 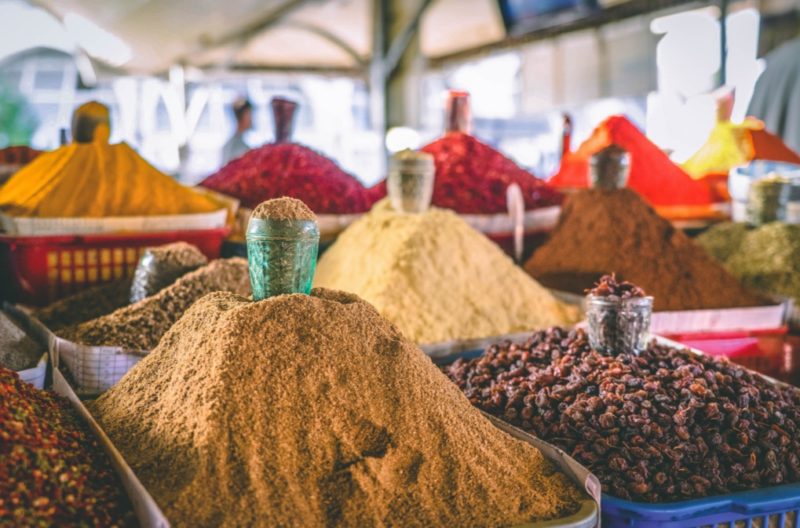 Markets have always been part of everyday life.

There was no single “Great Silk Road,” rather a developed network of trade routes that flourished and shifted, some say, from the 2nd century B.C. to the 15th century A.D., though other historians suggest it began far earlier than that. The exchange of precious goods shaped history: From China came silk and jade, tea, ginger, porcelain, bronze, paper, and medicinal herbs, while from Europe came glass, gold, silver, lapis, ivory, gems, coral, and wool. But while the Silk Road gave rise to lucrative trade, its true legacy was the unprecedented exchange of religion, ideas, art, architecture, languages, food, and music. 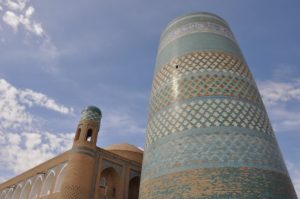 The shimmering blue tiles of a mosque in Khiva

Ukbekistan is poised to become an active leader today among the Central Asian states, but visitors come for its centuries of rich history when conquerors, merchants, nomads and—more recently—the Soviets ruled. Uzbekistan’s top-three destinations are spectacular: Samarkand, Bukhara, and Khiva, whose Old Towns (all impressively restored, although at times over-zealously so), are an incredible maze of exotic architecture, covered bazaars, and gorgeous decorative arts that are a glorious blur in my memory. 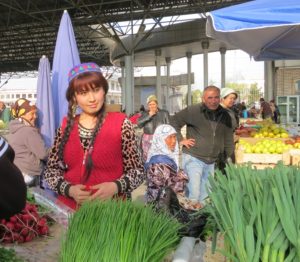 Fresh produce and fruit are plentiful.

Founded in the 7th century B.C., Samarkand was long known as the “Crossroads of Cultures” for its strategic location, cultural wealth, and worldly riches. Bukhara was Central Asia’s holiest city and boasts a quaint Old Town that is as lived in today as it was centuries ago. Groups of high school students engaged us in talk and mutual photo taking, while medieval trading domes live on as bazaars selling today’s interpretations of ancient crafts—silk scarves, silver jewelry, carpets, and dolls–where we enjoyed the timelessness of it all while doing some of our best shopping. 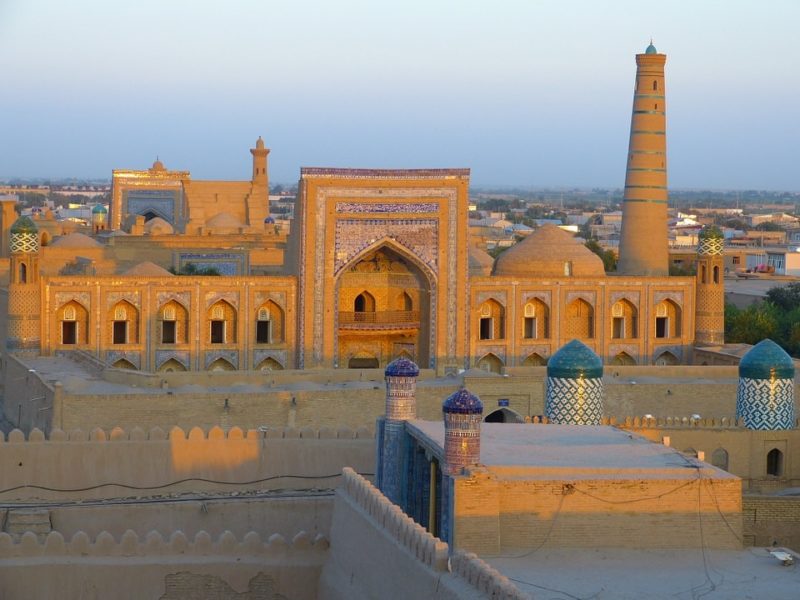 Khiva was the first city in Uzbekistan to be inscribed as a UNESCO World Heritage Site (1991).

Khiva is the last of the Great Silk Road cities in Uzbekistan, a former khanate that was the last resting place of caravans before crossing the desert into Persia. It is this arsenal of architectural treasures that have gained this unique triad of historical cities their coveted UNESCO World Heritage site status. 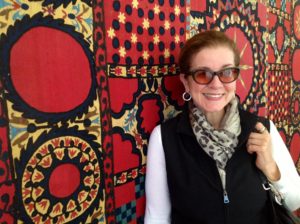 Patricia with a suzani textile

Uzbekistan was undeniably the crowd-pleaser, but our visit would not have been as memorable had it not been offset with the experience of the other four equally distinctive Stans. “Now is the time to visit these countries,” affirms Annie Lucas, MIR’s vice president, “as change is on its way.” The old Silk Road sites will remain for future generations, supported and protected by UNESCO, “but the open and friendly attitude and the lived-in qualities of the Old Towns of this region are bound to evolve,” says Lucas, “and we can’t predict the future.” 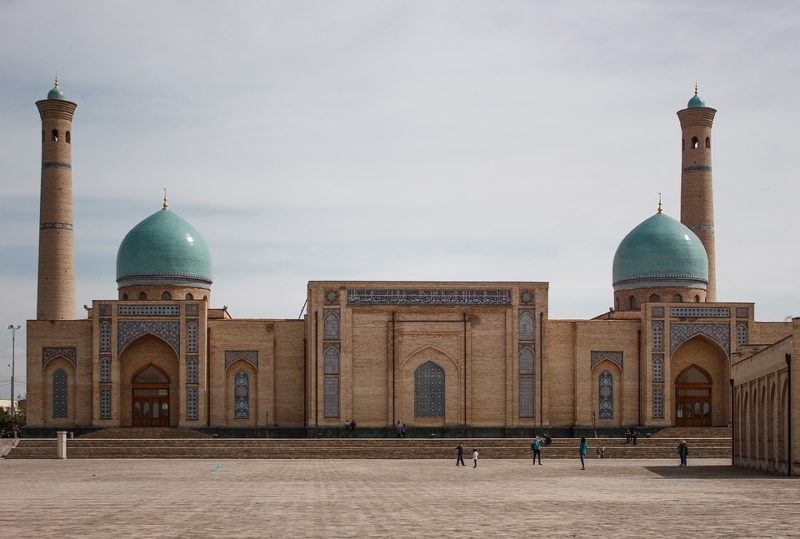 The capital city of Tashkent boasts a fascinating mix of architecture that is both traditional (such as the city mosque) and contemporary.