Dubai’s futuristic skyline is a work in progress. 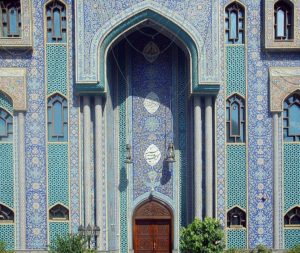 A gleaming, towering, skyscraping metropolis fronting the Persian Gulf (aka the Arabian Gulf), the pint-size emirate of Dubai has risen from the desert floor in a never-ending quest for the world’s biggest, brightest, and costliest urban amenities. Dubai is the most visited of the 7 territories that make up the United Arab Emirates, whose capital is neighboring Abu Dhabi—also worth exploring for those with extra time. Visitors arriving in Dubai during the month of Ramadan (beginning this year on the eve of May 15) when Muslims fast from dawn till dusk, may detect a subtle shift in the city’s frenetic energy. 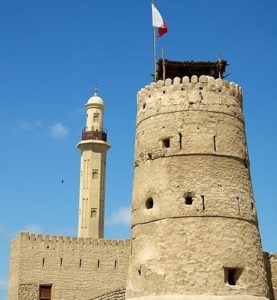 Under the leadership of its ruler, the visionary Sheikh Mohammed bin Rashid al-Maktoum, Dubai has become the region’s leading cultural, commercial, and leisure destination in a short period of time. But beyond the sleek towers and Jetsons-like modernity, Dubai’s historic core still resonates with Arabian authenticity. Experience it firsthand at the Dubai Museum, housed in the 1787 Al-Fahidi Fort, one of the city’s oldest buildings. The museum’s interactive installations explain in fascinating detail the story behind the city’s meteoric transformation. 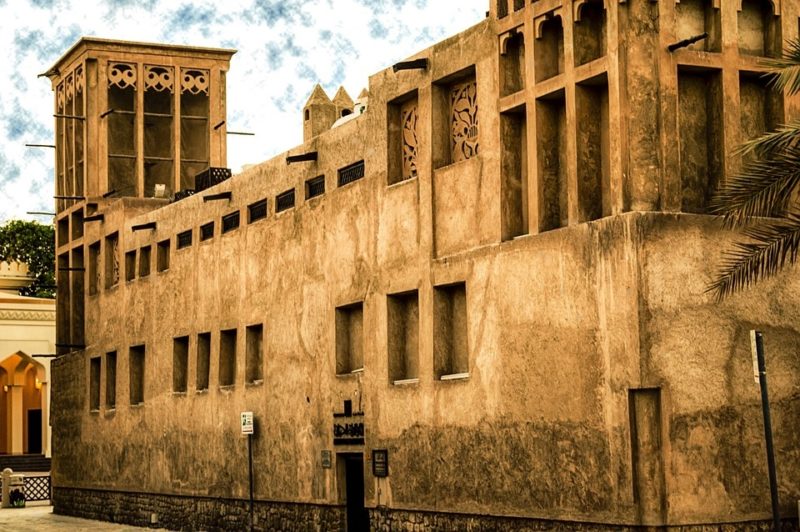 A traditional building and its barjeel wind tower used for cooling

Another glimpse into pre-petrodollar Dubai can be had next door in the historic Persian enclave of Bastakiya, where coral- and gypsum-walled buildings are capped by barjeel, the traditional wind towers that kept Emiratis cool in an era before electric power. Bastakiya has been transformed into a cultural district, with impressive art galleries, boutique hotels, cafes and inviting restaurants. Tea houses offer lunch in leafy courtyards of traditional homes; order from a menu of simple, small-plate mezze or regional dishes, such as grilled haloumi cheese and a chickpea and sultana salad. Other eateries both trendy and casual promise menus of European, Asian, and fusion fare—there’s not much you can’t find if you look. 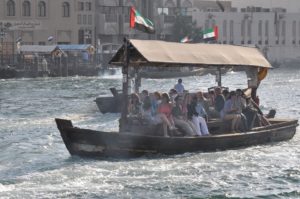 Dubai Creek—actually a wide, powerful river—is the city’s original thoroughfare, and the best way to experience it is with an evening cruise aboard a traditional dhow. Hop on an abra (a small wooden water taxi) to reach Dubai’s celebrated souks in the old Deira district: Follow the smell of saffron, cinnamon, and frankincense to the Spice Souk, but save your money for the Gold Souk, Dubai’s—and one of the gulf’s—largest and most famous. The long promenade is lined with hundreds of tiny shops selling finished pieces of 24-karat gold in every style, for every budget. 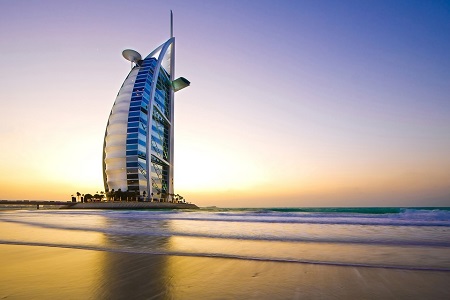 The Burj al-Arab Hotel is located on a private island.

At Dubai’s opposite extreme is a spectrum of audacious man-made wonders that is a work in progress. The Burj al-Arab’s brand new appeal is mellowing since its completion in 1999, but it remains one of the city’s most recognizable structures—an elegant sail-shaped hotel perched on its own private man-made island in the emerald Persian Gulf. A sumptuous suite in this seven-star resort costs a sheikh’s ransom, and visits for curious non-guests who drop by for a look aren’t free. A reservation for tea in the hotel’s 27th floor Skyview Bar will also cost you plenty but will provide excellent views, including some of the coastline’s impeccably maintained stretches of beautiful public beaches. 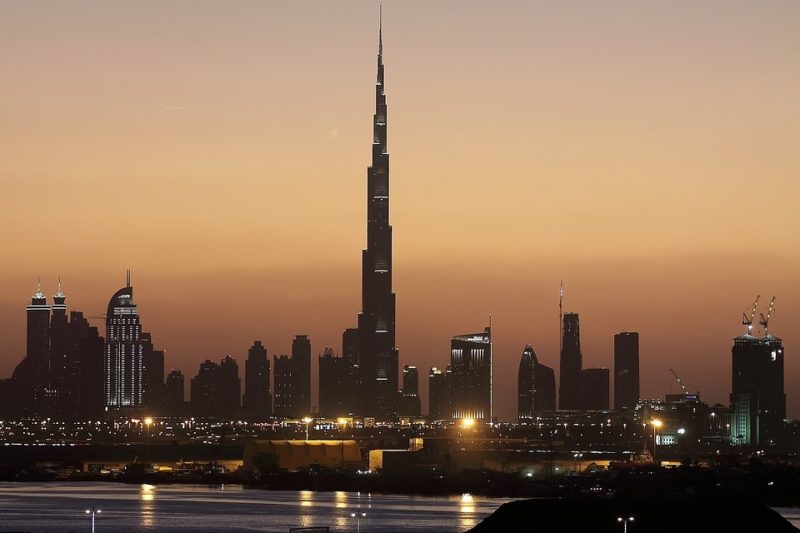 Burj Khalifa, the world’s tallest building since its completion in 2010.

Other architectural highlights include the eye-popping Burj Khalifa, which opened to much fanfare—and with a price tag of over $1.5 billion—in 2010 as the world’s tallest building at 2,717 feet (more than 160 stories). The 360-degree observation deck on the 148th floor is one of the city’s most popular attractions, while on 11 of its lower floors high-design seekers can check-in to the swank Armani Hotel. In the evening, crowds gather at its base for Vegas-style dancing fountains.

Part of the Mall of the Emirates, Ski Dubai offers wintertime fun. 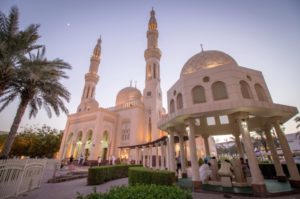 The Jumeirah Mosque is open to visitors.

With barely a third of its population actual Emirati citizens, Dubai is powered by the labor of millions of foreign workers. Many are Muslims, and for them and the local citizens the stunning Jumeirah Mosque was built in the 1970s in a traditional medieval style, crafted from smooth white stone and capped by a pair of elegant minarets. It is one of the few in the UAE open to non-Muslims visitors, with frequent informative tours. 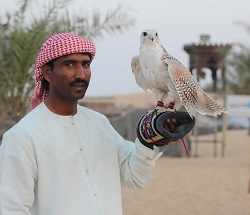 The popular sport of falconry

Ready to escape all of that high-octane urban energy? Dubai is surrounded by vast stretches of empty desert and you can easily escape for a day with a jeep safari or overnight stays at one of the nearby oasis resorts. Choose from a roster of activities such as sunrise drives, camel rides, falconry shows, and Arabic feasts accompanied by live Bedouin music and a belly dancer or two under the desert’s star spangled sky. 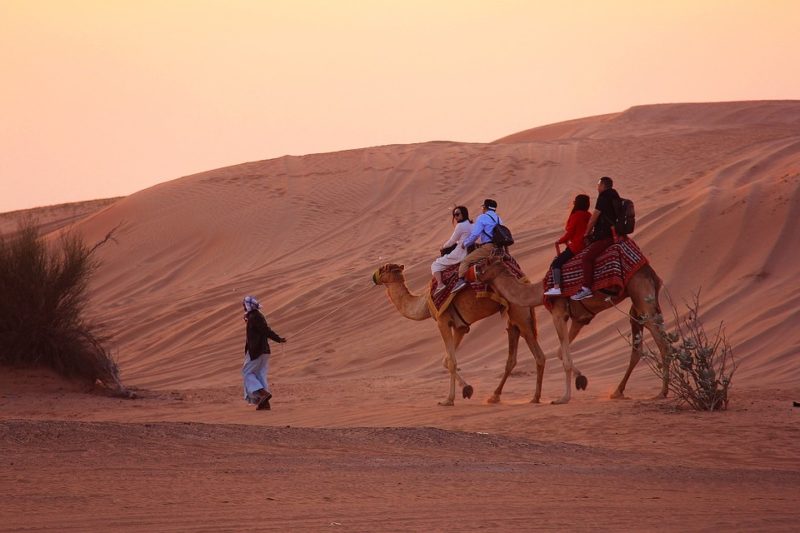 Exploring the desert by camel

Love to travel? Sign up for the 1000 Places newsletter and go somewhere new with Patricia Schultz every month.