How to Save for Retirement

Excerpted from Teresa Ghilarducci’s How to Retire with Enough Money.

Spending—and its partner, credit—is deeply ingrained in American life. “You deserve it!,” we’re constantly told by advertisements and the media, plus, “You get what you pay for” and, “It’s an investment” (even if whatever it is will have virtually no resale value at all once we walk out of the store with it).

But it’s actually possible to visit Hershey, Pennsylvania, and not eat chocolate. And it’s possible to live in America and not overspend. I’ve listened to quite a few people talk about how they intend to bridge the gap between the money they have and what they’ll need for retirement. Sometimes the ideas are good ones. Sometimes, frankly, they’re not. Here are some ideas I’d rather you ruled out.

Yes, the romantics say that the multigenerational family is going to have to be re-created to solve the retirement crunch. Admittedly, there’s charm to this idea, but financially, it’s not a magic bullet. Why? Because in America, the greatest predictor of a person’s wealth is the economic status of his or her parents. According to a 2012 Pew Charitable Trusts report, more than 40 percent of people who grew up in the bottom 20 percent of the income scale were still there in adulthood. The rest didn’t make it too much higher on the ladder: Fewer than a third had ascended to middle-class status or better. Working-class and lower-middle-class parents usually raise working-class and lower-middle-class kids.

The result: The more likely you are to need to live with your adult children, the less likely they are to have the space or resources to help you out. This is the same catch-22 we saw with working past age 65: It’s a strategy most available to the people who need it least. Also, it’s rarely the best solution in terms of everyone’s mental health: Adult kids often don’t want to live with their parents, and older people value their independence.

Sure, it’s a plan. But it’s a screwy plan. Yes, film directors shoot movies in states that offer tax advantages. But you’re not going to be there for a 12-week shooting schedule; this is your life. Are you going to want to leave friends, family, traditions, a favorite restaurant, and the familiar view from your front window—all for a marginal difference in tax rates? Even big businesses factor in these kinds of personal preferences when deciding where to make their headquarters. One study found that an influential factor in where businesses are headquartered is whether the CEO wants to live there. The tax advantage is a secondary consideration.

Seems counterintuitive, right? How can increasing your financial know-how be a bad thing? Yet statistics tell us it is. Study after study shows that people confident in their investment skills tend to trade frequently; they also trade on current news. The problem is that frequent trading increases your brokerage fees, cutting into your profits. And trading on the day’s headlines is just as bad. Current news to the world at large is news that’s been expected and taken into consideration by the pros, who have already sold and moved on. But the self-taught, investment magazine-reading investor is preparing to buy high in hopes a stock will go higher, and he or she is likely to sell low-earning assets to pay for it. In short, they’re buying high and selling low. You don’t need to be an economist to understand why that’s a bad idea.

People who read about investing a lot are confident. In most areas of life, that’s a good thing. It certainly is when you’re walking into the boss’s office to negotiate a raise, or approaching an attractive stranger at a cocktail party. But in the stock market, false confidence is your enemy.

Now that we’ve covered some of the bad ideas, here are a few good ones…

Good Idea #1: Downsize now; live on 70 percent of your income.

As I’ve discussed, very few people will have retirement income that equals what they were making during their working lives. Seventy percent is approximately the highest rate most people can hope for.

It’s true that some expenses will go away after retirement: As I noted before, you won’t have a commute anymore, for example, and you’ll no longer be setting aside savings. (Remember that, ideally, savings should be a monthly budget item like everything else during your whole working life.) But new costs will arise. You’ll be going to the doctor more, and Medicare and health  insurance won’t pay 100 percent of your expenses. You might also, if you have health or mobility problems, pay other people to cut your grass or clean your home.

The upshot is that to avoid a jarring drop in your standard of living in old age, you’ll need to learn to live well on that 70 percent now. It’s easier and mentally healthier to make new choices and develop better habits while you’re still in your 30s and forming spending norms with your partner, children, and peers. Being forced into a Spartan way of life in your 60s or 70s is very depressing.

Plus, there’s an obvious corollary: When you trim your spending, it’ll free up money to pay down debt and contribute to savings.

Good Idea #2: Have a nice home in a modest neighborhood.

Humans have lived in clans and villages forever, so we’ve been influenced by each other forever . . . sometimes to our detriment. Although the media and popular culture encourage you to buy as expensive a home as you can afford, that may be bad for your finances in ways that go beyond the monthly mortgage. Living in a high-income neighborhood is likely to nudge you into a more lavish lifestyle in emulation of how the people around you are spending their money: Being around affluent people makes affluence seem normal. What’s above average for the nation becomes average to you if you see it every time you step out the front door.

Consider bucking the trend and living in a more affordable part of town. Not only will your mortgage or rent and household expenses be lower, but you’ll have a pleasant sense of your own prosperity and, perhaps, a greater appreciation of what you have.

For more tips to help you save for the future you want, check out the book. 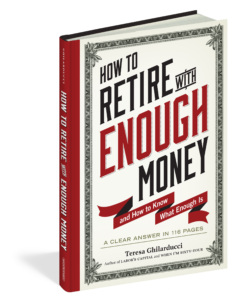 Here is a single-sit read than can change the course of your retirement. Written by Dr. Teresa Ghilarducci, an economics professor, a retirement and savings specialist, and a trustee to two retiree health-care trusts worth over $54 billion, How to Retire with Enough Money cuts through the confusion, misinformation, and bad policy-making that keeps us spending or saving poorly.

It begins with acknowledging what a person or household actually needs to have saved—the rule of thumb is eight to ten times your annual salary before retirement—and how much to expect from Social Security. And then it delivers the basic principles that will make the money grow, including a dozen good ideas to get current expenses under control. Why to “get rid of your guy”—those for-fee (or hidden-fee) financial planners that suck up valuable assets. Why it’s always better to pay off a loan or a mortgage.

There are no gimmicks, no magical thinking—just an easy-to-follow program that works.