UNLIKELY FRIENDSHIPS: The Rottweiler and the Wolf Pup 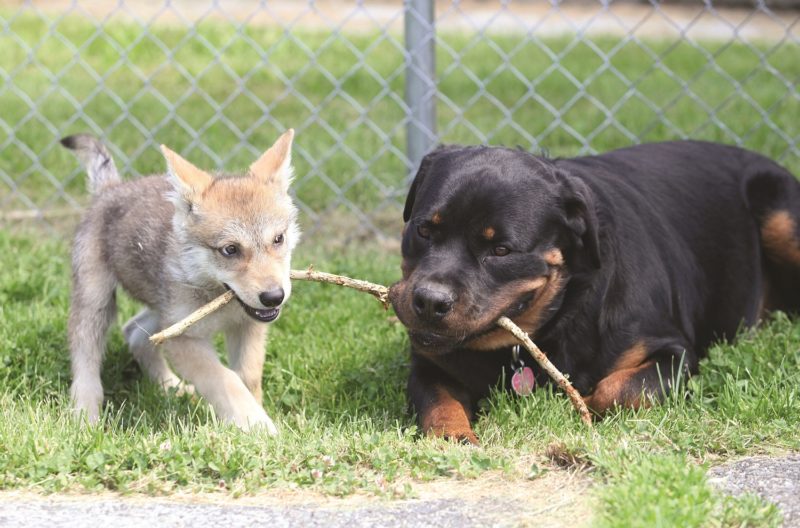 The birth of the wolf pup was totally unexpected. Staff at the Kisma Preserve in Mount Desert, Maine, thought the young adult pair too young to breed, so they weren’t watching for a pregnancy. But then, out came a pup—born to a mother not yet mature enough to understand her role as parent. “There was no aggression,” says the preserve’s director, Heather Grierson, “but she had no maternal instinct whatsoever. She just didn’t know what to do with it.” Staff members at the preserve were used to bringing work home with them. In this case, Heather decided to offer her house to rear the baby animal, a helpless bundle with eyes still tightly shut.

Ulrok the rottweiler was there to greet them when Heather arrived with her tiny charge. “Right from the beginning, he took excessive interest,” Heather says. “I misinterpreted it at first, thinking he might get overly rough. Plus, he’s huge and young and clumsy and might have hurt her by mistake. But he didn’t. Instead, he was amazingly maternal.” When the puppy whimpered, “he wanted to clean her top to butt, normally the mother’s job. Ulrok simply took over. If he could have nursed her, he would have.

The wolf was completely responsive to the rottie’s overtures, happy for the attention. And after realizing Ulrok wasn’t content unless the pup was within licking reach, Heather let them share a bed so they could cuddle. The still-awkward pup tried to play with the big dog, and even licked Ulrok’s mouth and chewed his tongue to try to get him to regurgitate food, as wolves do in the wild. “He’d neutralize her with his paw if she got too excited, but Ulrok was so patient with her!”

The pup’s wolflike ways showed at mealtime as well. When it comes to food, wolves and well-fed domestic dogs are very different animals—not so much in what they like to eat, but in the lengths to which they’ll go to protect their lunch. Any self-respecting wolf challenged for her food will curl her lip and snarl, eyes wild and stance wide. The pup did the same, and Ulrok respected her space. “Here was this five-pound pup growling at this one-hundred-twenty-pound dog, and he’d just back off and let her eat,” says Heather. “People think that if you raise a wolf in captivity, it’ll be like a pet dog. That’s not true. They are hardwired in different ways.”

That difference in temperament and behavior is one reason Heather wanted to make sure the wolf was exposed to her own species as soon as possible. So when the time was right, the pup was introduced to an old female wolf at the preserve named Morticia, who had been living alone for years. Happily, the two bonded from the start. “The pup breathed new life into the old wolf, who became more active having a young animal around. She was soon regurgitating food for her and teaching her wolf mannerisms and behaviors,” says Heather. More convinced than ever that the pup knew what she was, the preserve staff felt confident in plans to integrate her into one of their captive wolf packs when the day came that elderly Morticia would no longer be there for her young companion.

As for Ulrok, whose breed is known for its herding and guarding instincts, he’s now offered his parenting services to numerous animals at the facility, including tiger cubs, a baby gibbon, and even an injured leopard tortoise. “He really is the peace-love-and-happiness rottweiler of the world,” says Heather. “He was just destined for this life.”