On average, a pie in our apartment lasts four or five days, as Aaron happily eats a slice every morning for breakfast and I have a slice or two during the week as an afternoon snack . . . that is, every pie except for apple. An apple pie in our apartment used to sit on our kitchen counter, half eaten, until I got tired enough of looking at it to finally throw it away. It was simply not our favorite pie. Until the fall of 2012. With our move to D.C., we had signed ourselves up for a Community Supported Agriculture (CSA) share through Norman’s Farmer’s Market, where not only did we get a big basket of veggies once a week, we also got a smaller basket of whatever fruit was in season. Given that we started the share in September, that meant a lot of apples. So, I went back to the drawing board on my standard apple pie recipe and took out a few extraneous spices like allspice and ginger, leaving only a dash of cinnamon and a pinch of nutmeg. These two, when paired with the crisp and tangy apples Maryland had to offer, were perfect. Aaron and I have finished every apple pie since.

If you’re opting to make Teeny Pies with this recipe, I recommend dicing the peeled apples into 1-inch cubes rather than slices, because they fit so much more easily into the 5-inch tins. 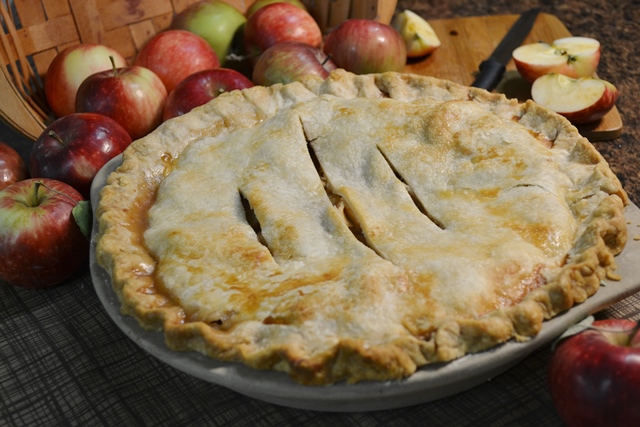