If you’re a homebody with your head permanently stuck inside a book:

We promise, you won’t regret leaving your reading nook to visit these 7 spots, excerpted from the bestselling Atlas Obscura. 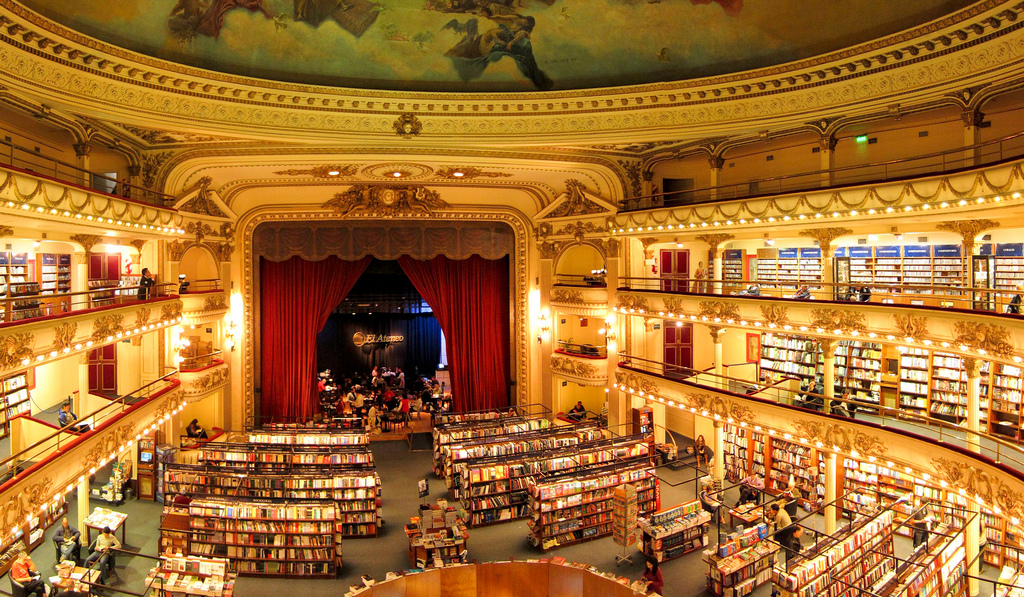 With frescoed ceilings, ornate theater boxes, elegant rounded balconies, detailed trimmings, and plush red stage curtains, the El Ateneo Grand Splendid is hardly your average bookstore. Built in 1919, the majestic building began as a theater featuring tango legends, then became a cinema—the first in Buenos Aires to show films with sound. While the titles on offer tend to be more expensive than those of other city bookstores, the staggeringly opulent interior is reason enough to pay a visit. 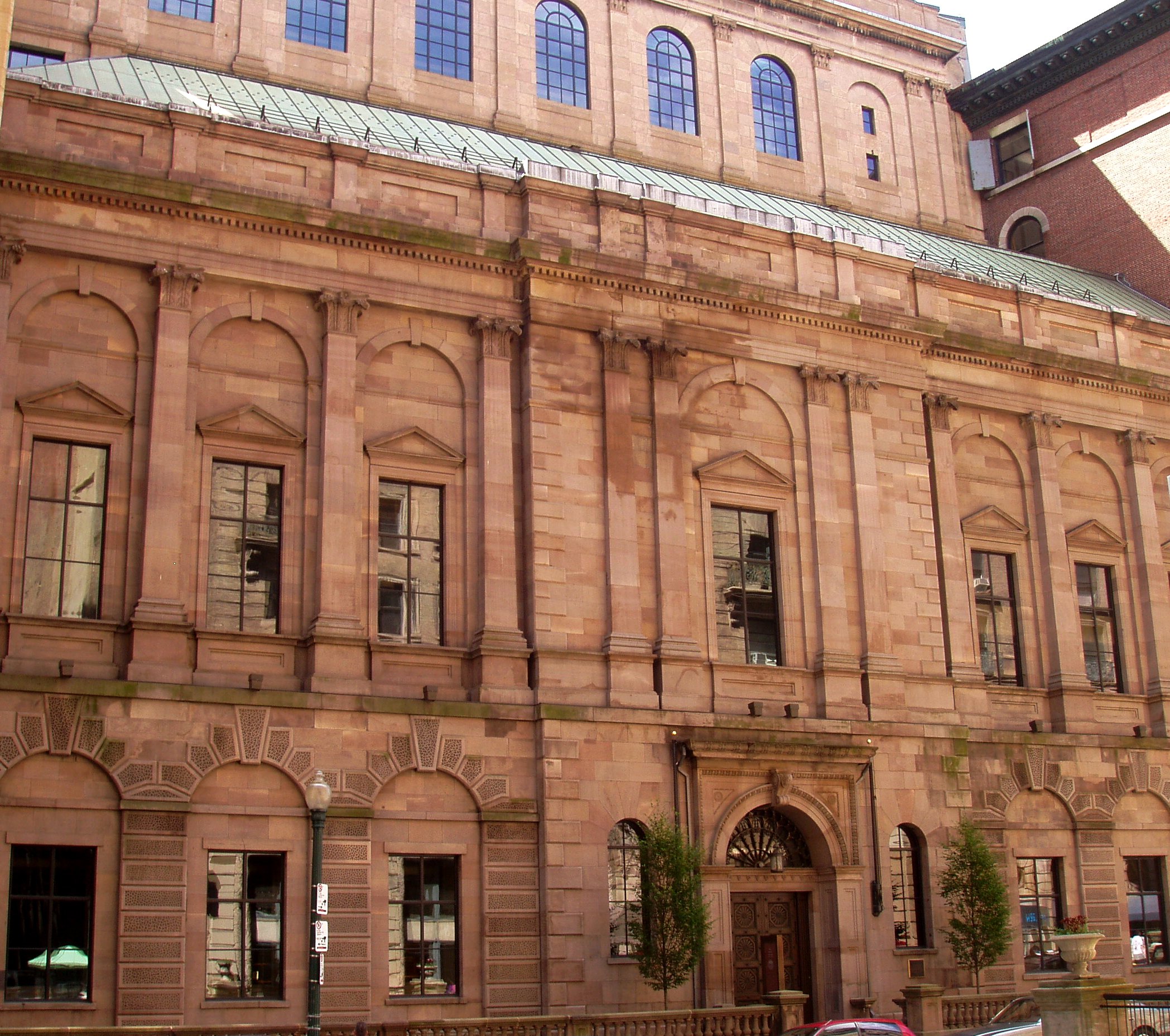 Among the rare books, maps, and manuscripts of the Boston Athenæum, a private library established in 1807, is a small publication bound in leathery light gray. Titled Narrative of the Life of James Allen, it is a well-preserved example of autoanthropodermic bibliopegy: a book bound in the skin of its author.

James Allen was a New England bank robber and highwayman. His brazen ambushes during the 1830s landed him in Massachusetts State Prison, where he died of tuberculosis in 1837 at the age of 28. As ill health tightened its grip on the illiterate criminal, he began to dictate his memoirs to a warden, instructing him to deliver a skin-bound copy of the finished book to a man named John Fenno.

Though Allen had only met Fenno once, the circumstances of the encounter ensured he would never forget him. In 1834, Allen attacked Fenno on the Salem Turnpike. To the surprise of the highwayman, Fenno fought back, only fleeing after Allen scrambled for his gun and fired a shot, hitting the victim’s torso. Miraculously, a buckle on Fenno’s clothing deflected the bullet.

Arrested in 1835 based on a tip by Fenno, Allen nonetheless maintained an admiration for the target of his attempted robbery. As a token of respect, Allen bequeathed a unique gift: his life story, bound in his own tanned, dyed skin.

10½ Beacon Street, Boston. Get the T (Red or Green line) to Park Street station. Guided tours for nonmembers are available on Tuesday and Thursday afternoons. 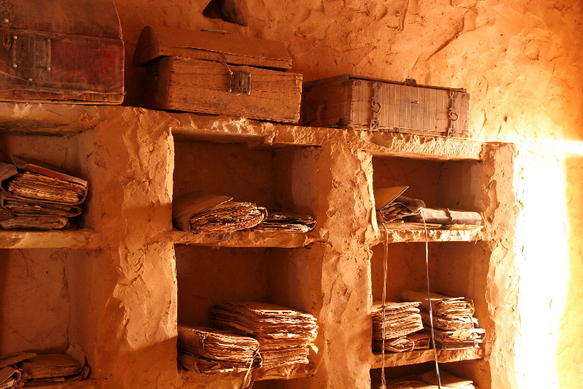 Soon after its founding around the 12th century, the desert mud-brick village of Chinguetti became a hub for trade, culture, and scholarship. Located on a trans-Saharan caravan route, it catered to the desert’s nomadic population, receiving visitors with open arms—and open books.

The libraries of Chinguetti, owned and maintained by village families, contained a wealth of medieval Arabic manuscripts on science, mathematics, law, and Islam. Scholars, pilgrims, and the holy and venerated came to the village to pore over these handwritten, leather-bound tomes, and exchange ideas with one another.

Now desertification is causing the Sahara to encroach on Chinguetti. A few thousand people still live there, but sand is being pushed into the alleyways and swept against the walls. The libraries remain, but the dry air and swirling sand are a threat to the centuries-old manuscripts. Despite the risks, the families who own the texts prefer to keep them in place, and will display them for visitors using gloved hands.

Cars to Chinguetti leave from the nearby town of Atar. Chinguetti itself has few facilities, but some locals offer homestays, meals, and camel tours of the surrounding dunes. 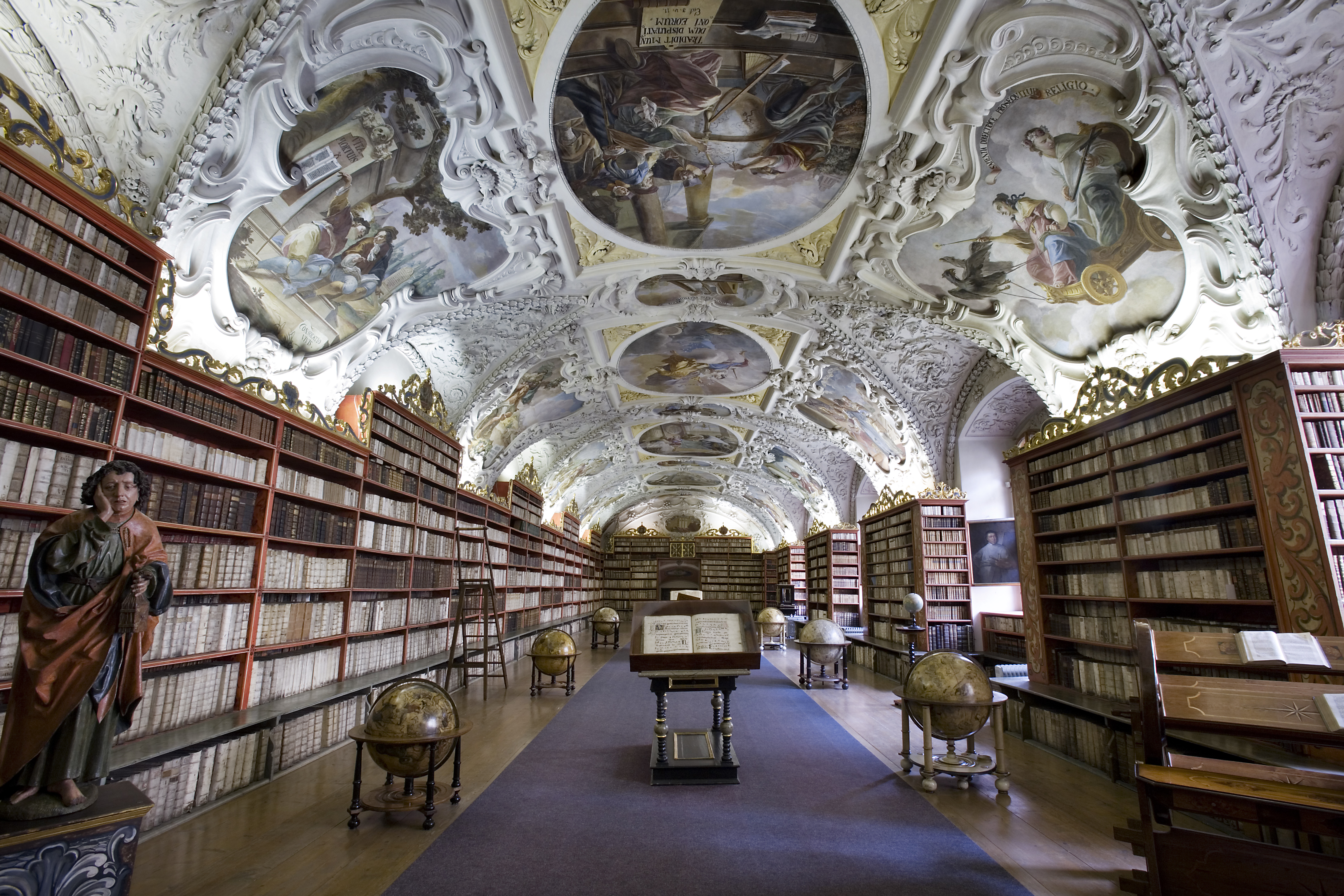 A magnificent library featuring 17th-century globes, 60,000 ancient books, and baroque ceiling frescoes is the main attraction at this monastery. Built in 1140, the property endured multiple wartime attacks over the centuries and has been rebuilt many times over. After taking in the splendor of the library’s Theological and Philosophical Halls, stop by the adjacent antechamber and browse its cabinet of curiosities. Among its eclectic offerings are a slowly disintegrating dodo bird, bowls of wax fruit, and a static electricity generator.

Strahovské nádvoři 1, Prague. You may need advance permission to enter the library. 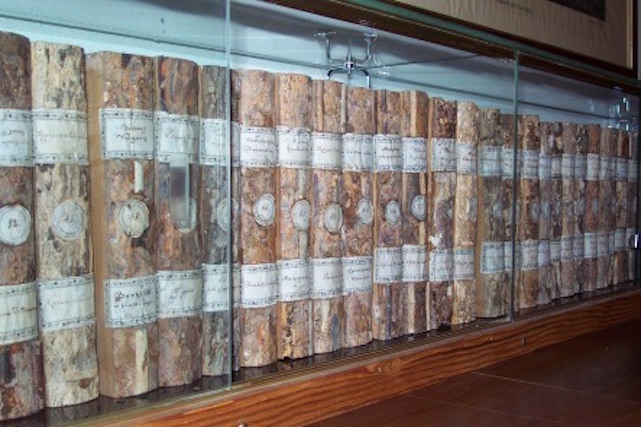 Each book in this 56-volume collection tells the story of a particular tree—not in words or illustrations, but with parts of the tree itself.

The wooden books of Padua University date from the late 1700s and early 1800s. While most books are made from wood—pulped into paper—these are different: The back and front covers are made from the tree’s wood, its spine made of the tree’s bark. Inside are samples of the tree’s leaves, twigs, flowers, seeds, and roots. Each book is accompanied by a handwritten piece of parchment with a key explaining the contents.

The Mundaneum was, to put it mildly, an ambitious undertaking. Belgian lawyer Paul Otlet and Nobel Peace Prize winner Henri LaFontaine established the project in 1910 with the aim of compiling the entirety of human knowledge on 3 × 5-inch index cards. The collection was to be the centerpiece of a “world city,” designed by architect Le Corbusier, forming a nucleus of knowledge that would inspire the world with its libraries, museums, and universities.

To address the daunting task of arranging bits of paper into a coherent compendium of world history, Otlet developed a system called Universal Decimal Classification. Over the next few decades, a growing staff created and catalogued over 12 million cards summarizing the contents of books and periodicals. Having assembled this wealth of knowledge, Otlet began offering a fee-based research service. Queries came in by mail and telegraph from around the globe at the rate of 1,500 per year.

With the paper-based system becoming cumbersome by 1934, Otlet hoped to move on to another system: a mechanical data cache accessible via a global network of what he termed “electric telescopes.” To his dismay, the Belgian government had little enthusiasm for the idea. With World War II looming and priorities elsewhere, the Mundaneum moved to a smaller site, eventually ceasing operations after years of financial instability. The final blow came during the Nazi invasion of Belgium, when soldiers destroyed thousands of boxes filled with index cards and hung Third Reich artwork on the walls.

Otlet died in 1944, his Mundaneum and World City mere memories. He is now regarded as one of the forefathers of information science—his vision of a globally searchable network of interlinked documents anticipated the World Wide Web.

The remains of the Mundaneum—books, posters, planning documents, and drawers with original index cards—are now on display at the Musée Mundaneum in Mons.

76, rue de Nimy, Mons. The Mundaneum is a 15-minute walk from the Mons train station.

7. The Chained Books of Hereford Cathedral 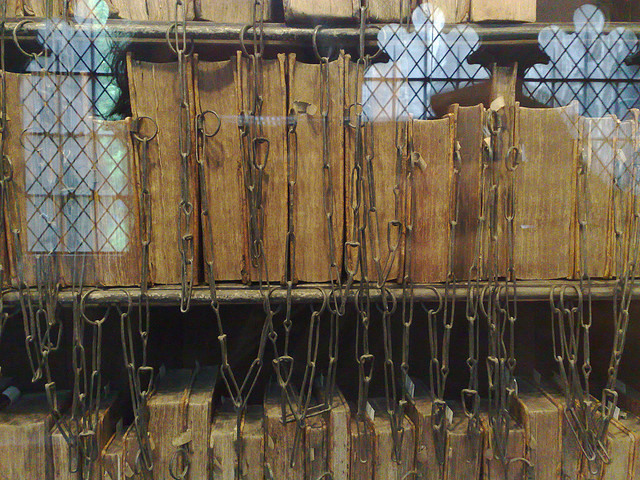 This cathedral contains two medieval marvels: a chained library of rare books and one of the earliest maps of the world.

In the Middle Ages, before the availability of the printing press, volumes on law and religion were quite rare and valuable. To protect against theft, the books at Hereford Cathedral were chained to desks, pulpits, and study tables.

The chained library was created in 1611 when a collection of hand-transcribed, hand-bound books was moved into the Lady Chapel. Most of the volumes in the collection are acquisitions dating back to the 1100s, although the oldest book in the collection, the Hereford Gospels, dates to about the year 800.

The medieval world map stored at Hereford Cathedral depicts three continents: Europe, Asia, and Africa. On the as-yet-unexplored periphery of these lands roam fire-breathing dragons, dog-faced men, people who survive on only the scent of apples, and the Monocoli, a race of mythical beings who take shade under their giant feet when the sun becomes too bright.

The 5 × 4.5-foot map (1.5 × 1.4 m), created around 1300, is part geography, part history, and part religious teaching aid. A lack of confirmed information on Asian and African geography presented no obstacle for the mapmaker, who used hearsay, mythology, and imagination to fill in the gaps—which explains the four-eyed Ethiopians.

5 College Cloisters, Cathedral Close, Hereford. The cathedral is a 3.5-hour train trip from London and a 15-minute walk from Hereford railway station. 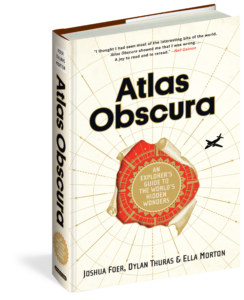 It’s time to get off the beaten path. Inspiring equal parts wonder and wanderlust,Atlas Obscura celebrates over 700 of the strangest and most curious places in the world.

Talk about a bucket list: here are natural wonders—the dazzling glowworm caves in New Zealand, or a baobob tree in South Africa that’s so large it has a pub inside where 15 people can drink comfortably. Architectural marvels, including the M.C. Escher-like stepwells in India. Mind-boggling events, like the Baby Jumping Festival in Spain, where men dressed as devils literally vault over rows of squirming infants. Not to mention the Great Stalacpipe Organ in Virginia, Turkmenistan’s 40-year hole of fire called the Gates of Hell, a graveyard for decommissioned ships on the coast of Bangladesh, eccentric bone museums in Italy, or a weather-forecasting invention that was powered by leeches, still on display in Devon, England.

Created by Joshua Foer, Dylan Thuras and Ella Morton, Atlas Obscura revels in the weird, the unexpected, the overlooked, the hidden and the mysterious. Every page expands our sense of how strange and marvelous the world really is. And with its compelling descriptions, hundreds of photographs, surprising charts, maps for every region of the world, it is a book to enter anywhere, and will be as appealing to the armchair traveler as the die-hard adventurer.

Anyone can be a tourist. Atlas Obscura is for the explorer.

Travel
September 20, 2016 By Workman Publishing
#TalkLikeAPirateDay: DOODLE ADVENTURES Contest THIS IS ME Book Birthday and Sweepstakes