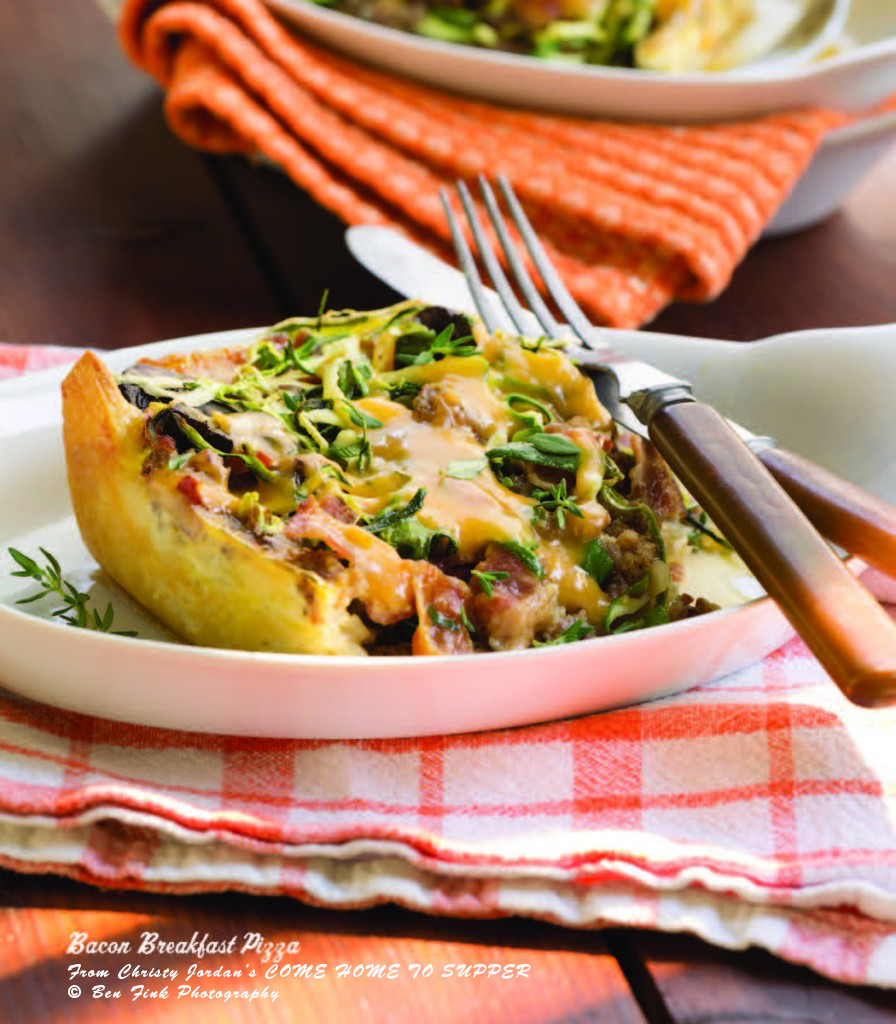 A former editor-at-large of Southern Living and a contributing editor to Taste of the South, Christy Jordan is the creator of the beloved site SouthernPlate.com. In her book Come Home to Supper she shares the recipes that bring her family to the table, night after night—and that get them out the door in the morning. Here’s her recipe for Bacon Breakfast Pizza.

“My mother used to make this hearty breakfast pizza with canned biscuit dough when my brother was a teenager living at home. He loved it because it contains all of his breakfast favorites in one dish! He always seemed to be going out fishing early on Saturday mornings and then he’d come home shortly after breakfast with several hungry friends in tow. As he got older and lost his fondness for early mornings, Mama began making this for supper. Once canned crescent dough became available, she switched to using that since it is so much easier than pressing the biscuit dough into the pan.

You can easily adapt this recipe just by switching the toppings up a bit.”

2. Place the bacon in a large skillet over medium heat and cook, turning occasionally, until it is browned and crispy, 7 to 8 minutes. Remove it from the skillet to the paper towel–lined plate and set it aside. (Let the bacon grease cool slightly, then pour it into a heatproof container and reserve it for another use.)

3. Set the skillet over medium heat again. Add the sausage and cook, stirring with a wooden spoon to break up the meat, until no longer pink, 7 to 8 minutes. Drain and set aside.

4. Press the crescent roll dough into the bottom of the prepared baking dish, sealing any seams by pinching them together; the dough should extend up the side of the pan about half an inch.

5. Spread the hash browns over the dough and sprinkle with the salt and pepper.

6. Beat the eggs together in a large bowl and pour them over the hash browns, using a wooden spoon to spread them out evenly. Crumble the bacon over the eggs and sprinkle them with the sausage.

7. Bake until the eggs are set in the center, 30 to 35 minutes. Remove the baking dish from the oven, sprinkle the cheese over the top, and bake just until the cheese has melted, 2 to 3 minutes.

8. Top the pizza with the sautéed vegetables and fresh herbs, if using, then cut into squares and serve warm.

A heartfelt celebration of family dinners—the comforting, delicious food that memories are made of—by the new doyenne of Southern cooking. Conceived and written to reflect the reality of today’s hectic schedules, Come Home to Supper offers more than 200 deeply satisfying dishes that are budget-minded, kid-friendly, and quick. These are the everyday meals that Christy Jordan most loves to cook, and her family most loves to eat.